Home International Arrests Made After Brutal Attack On Delhi Woman 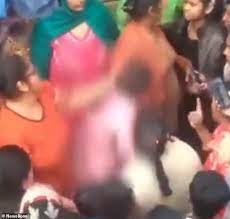 Delhi police have arrested 16 people, including nine women and a minor, after the brutal gang rape and torture of a young woman.

A 20-year-old mother-of-one was gang raped and tortured before being paraded into a crowd that attacked her.

The woman was reportedly abducted from her home by four men and raped.

The victim’s head was shaved, her face blackened with soot, and a garland of shoes put around her neck as she was hit and paraded through the streets.  Videos of the torture has gone viral, causing an outrage.

The gang rape was allegedly an act of revenge by the family of a teenage boy who committed suicide last November after the woman, who is married and has a three-year-old son, rejected him.

The boy’s family had reportedly threatened the woman before, forcing her to move home.

The victim’s sister, 18, said the teenage boy had fallen in love with her and was always calling her to leave her husband.

The boys family blamed the 20-year-old for his death.

‘Some women kept walking her around for two hours! All the women involved must be arrested and severely punished.’

The victim is thought to be in a stable condition and is being guarded by police in a safe house in Delhi.