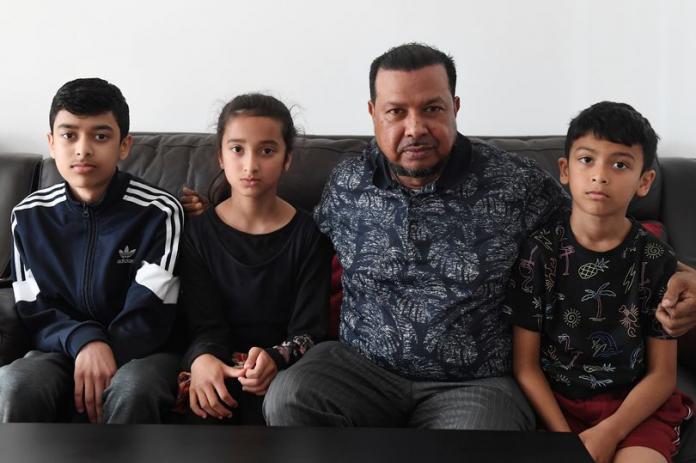 A family-of-six have been left heartbroken after a National Express coach delay caused them to miss their flight.

Abdul Choudhury, his wife and their four children from Etruria in Stoke-on-Trent, Staffordshire, booked a one-week holiday to Italy to visit family that thy haven’t seen for 10 years.

They are calling on National Express to pay the £274.55 cost of their flights after missing their Manchester Airport flight.

As they approached their gate, they were told the Ryanair flight had left without them.

Abdul was offered alternative flights at a cost of £600, but this was not an option, so the family got the train home and missed their one-week break.

Now National Express has offered to refund their coach and rail travel on the day – but 54-year-old Abdul says they should refund the £274.56 cost of his flights.

“I went to the counter to ask what had happened and they said it was delayed in Birmingham. I told them that I had a flight at 7pm but they just said they didn’t know what was happening because they weren’t from National Express.

“So we decided to wait because if the coach got there for 4.26pm we would still get to the airport at 5.25pm, but it didn’t arrive until 4.50pm. I explained to the driver that we’d got a flight at 7pm and he told us not to worry and started driving. But it was rush-hour and it took us 30 minutes to pass Basford roundabout.

“When we got to Terminal 1 we had to run for 20 minutes like we were in a marathon with four children and our bags. When we got to our gate they said our flight had gone.

“We then had to get the train home to Stoke-on-Trent and we didn’t get back until 11.15pm.”

Abdul and his family were flying to Milan to visit relatives who they hadn’t seen for 10 years.

He said: “It was a very stressful day, my wife was really upset and so were the children. They were falling on the floor crying because they were really excited.

“We were meeting with relatives who we hadn’t seen for 10 years and we had to let them down as well. The kids are going back to school now so that was our last chance to visit them.

“National Express says it is willing to refund the coach and train travel, but not the money for our fights. But we missed the flight because of them and it needs to be responsible for it.

“National Express had my email address and phone number so could have easily text me to let us know the coach was running late so we could arrange alternative transport but when the time had changed to 4.26pm it was already too late.

“It was a traumatic experience for us. I’ll never use National Express again for the airport.”

The 528 service from Hanley to Manchester Airport had been due to arrive at 4.30pm – and it was 110-minutes late.

A National Express spokesman said: “This was due to queuing traffic caused by a major accident involving a three-vehicle collision, lane closures and emergency barrier repairs between junctions eight and nine on the northbound  M6  earlier in the day.

“Our recommendation to customers when booking travel to the airport is to plan to arrive no later than three hours before the departure time of their flight to allow for any reasonable traffic and ensure they can clear check-in and security.

“While we do factor likely traffic and congestion into our timetables, this kind of delay is out of our control and in these instances we will endeavour to update affected customers and provide appropriate support.

“Unfortunately, we did not speak directly with Mr Choudhury on the day to provide any assistance but have since offered a full refund of both his coach and rail travel on the day.

“We have also advised him that it should be possible to claim compensation for his flights through his travel insurance provider.”