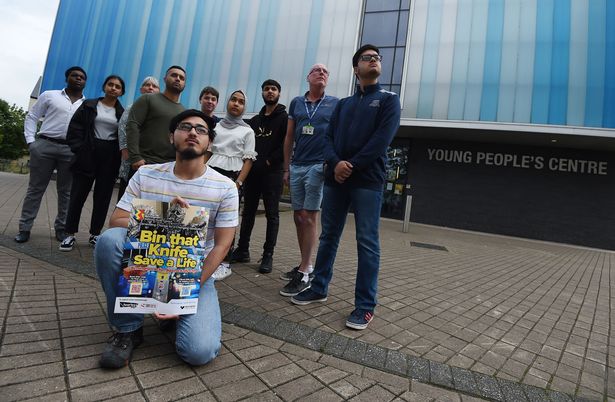 Members of Birmingham’s Aspiring Youth Council are taking their hard-hitting message about knife crime into youth centres and schools across the city and have created a video and posters.

Birmingham’s Aspiring Youth Council, have launched a summer-long “Bin That Knife, Save A Life” campaign. Every month there are nearly 300 knife-related offences recorded by West Midlands Police – with young people most likely to be victims.

The young campaigners hope to reach hundreds of youngsters over the holidays through a programme of workshops and training events.

Their aim is to persuade more teenagers about the hazards of carrying a knife – and train them with the skills to challenge friends who might be tempted and keep themselves safe when trouble erupts.

“We see it all around us, it’s on our minds every day,” said 16-year-old Narvera Parvez, a council member and one of the city’s youth crime commissioners.

“This is not just a gang issue – older adults think it’s all gang related but there are plenty of kids not involved in gangs or violence who carry knives.

“It’s infiltrated so many communities in Birmingham, and knives are often being carried by people you wouldn’t expect. It’s not that people want to do harm; they are just carrying them because they feel they have to, for safety,” said Navera, from Aston.

“That’s why they carry knives. Most of us will know of someone who carries knives.”

Awez Khan, from Aston, one of Birmingham’s youth MPs, said it was a mistake to assume young people carrying knives were always part of crime-linked gangs. “Often problems arise are just issues between groups of friends, or over some really small thing like something that was said online, or a minor incident.”

Awez, who has previously spoken up about the horrific impact of losing a close friend to knife crime,said: “A lot of people think that if they are not carrying a knife, the other person will be. They think they are evening the odds, they think: ‘if they do pull a knife out then I will be armed too’. But the consequences are massive, and we are going out to share those stories.”

It’s not just a ‘boy issue’ either, the activists said. “It’s presented as a male-only issue but there are girls who carry knives and girls and women who are affected. By labelling it as a boy problem then you dismiss the girls who are affected – it’s affecting all young people,” said 16 year old Mahfuza Khandokar.

Haroon Irshad, 18, added: “I went to an event in Erdington and two girls got into a fight – the older brothers got involved and then a knife was used. Everyone is affected by this. Whenever there’s a knife, something really bad is likely to happen.”

It is also not an issue solely related to race – “even if the media sometimes present it as an ethnic problem”, added Awez Khan, also 18.

“Youth violence is depicted as a race-specific issue because of certain incidents that make the headlines but it really is not. We are all equally at risk, it could happen to anyone. It is a young people issue.”

Haroon said knife crime was “the number one concern” of young people in the city and indeed across the country.

“Gang crime, hate crime, poverty, lack of opportunity and inequity all feed into this issue. Put together they make a massive concoction that spills over out of the cauldron and affects everyone.

“The impact on so many people is immense. Knife crime has led to so much sorrow and sadness and makes people concerned for their safety.

“This affects our generation in this city the most, out of anything.”

The group of around 30 activists, aged 16-21, are visiting youth centres across the city to provide mentoring and raise awareness about the risks of carrying knives and how to reduce risks.

Each of them has been trained to deliver a programme called Mentors in Violence Prevention, they have created a video to get the message out.

The video shows a teenager – played by Awez Khan – watching news clips about knife attacks before heading out, picking up a knife from a table. Later, in a minor altercation, he pulls out a knife, only for it to end up being used against him.

A poster which is going to be up in schools across the city, featuring two QR codes that kids can scan on their phones to view the video and find out where their nearest knife bin is. The poster carries the slogan ‘Bin That Knife, Save a Life’ along with the Birmingham Aspiring Youth Council logo and message “Generating Change for a Changing Generation.”

They also encourage young people worried about the consequences of reporting crime to do so anonymously by visiting the fearless website or contact Crimestoppers 0800 555 111.

“We are going in to share the harsh reality of life with a knife,” said Daniel ‘Samson’ Ayodeji, 18, a youth crime commissioner for the West Midlands.

The key message in the workshops they are delivering is that all young people can be ‘active bystanders’ by discouraging and actively challenging peers who carry knives, as well as ensuring they know how to stay safe in a range of situations. Young people will also be encouraged to discuss their own feelings and experiences.

The Birmingham Aspiring Youth Council is a forum for young people aged 11 to 19, who meet twice a month to discuss issues facing young people in the area.

The council focuses on a range of issues that affect young people, including youth violence, mental health, poverty and homelessness.

“We are all part of the council because we are unhappy with what’s happening in our city and want to make a change. We are motivated and passionate about this, we want to help,” said Awez.

The project is supported by Birmingham City Council as part of its youth service work.