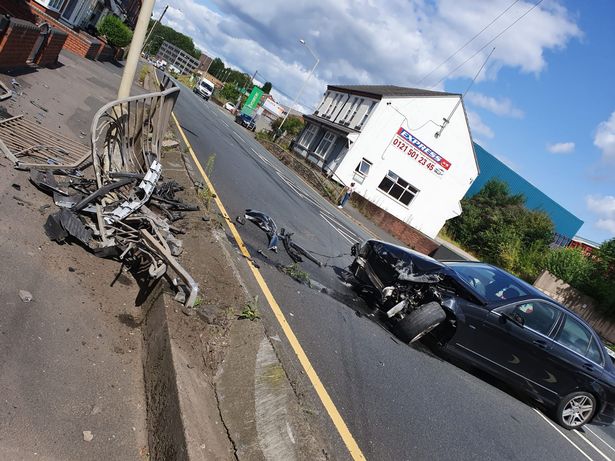 A driver, who is in his 60s, was taken to hospital after he lost control of his black Mercedes and drove into a lamppost on a busy Halesowen road on Tuesday 12 August.

Shaz Saleem, owner of Express Taxis, told Black Country Live he was in his office when he heard a “really loud bang”.

“I looked out and saw everything had come to a standstill,” he said.

“I went outside and saw the man in the car, his airbags had come out and he was just really shocked and shaken, but luckily he didn’t seem hurt.”

After spotting a clear liquid pouring out of the car, the quick-thinking taxi boss decided it was a wise move to get the driver out of the vehicle as a precaution.

“I got him out and sat him down, a neighbour came out too. One of the ladies from my office got him a water and we just sat with him and calmed him down.

“The car made a big impact, it took the railings out completely and hit the lamppost.

A spokesman for West Midlands Ambulance Service said one ambulance was sent to the scene and paramedics assessed the patient, who had suffered multiple injuries, before he was taken to Birmingham Queen Elizabeth Hospital for further treatment.

His injuries were not believed to be serious or life-changing.