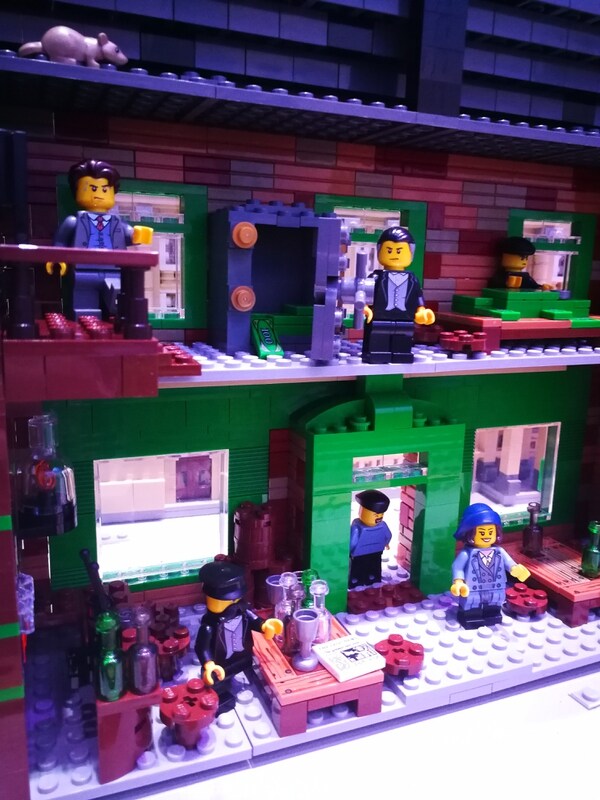 A miniature Lego version of the famous Garrion Tavern from the Peaky Blinders has arrived in Birmingham- to coincide with the premiere of season 5 in the city centre.

The model of the public house has been created in Lego and was unveiled at the Legoland Discovery Centre in the city on Thursday 18th July the day the premier of series 5 was to be shown.

It was created by master model builder Michelle Thompson and depicts the show’s infamous pub setting, complete with the gang headquarters and a pile of illicit cash on the table. The counting room even includes a chalkboard for tallying bets and a working, opening safe for keeping their money away from mischievous hands.

The model, created from more than 1,043 pieces, including eight Lego minifigures representing the characters from the show – most notably Thomas Shelby, who is featured driving a horse and cart which contains barrels covering up a secret supply of ammunition, akin to his character on the show.

Ms Thompson said: “As Brummies here at the attraction we are big fans of the series, so we were excited to hear the premiere was taking place here in the city this week.

“We thought it was only fitting to pay homage to the series by recreating one of the famous locations in Lego.”

The premiere of season five of Peaky Blinders took place at Birmingham Town Hall on Thursday night(18), ahead of the show’s return to BBC One later in the year. Stars including Helen McCrory, Sophie Rundle, Packy Lee, Natasha O’Keeffe and Finn Cole took to the red carpet, before an exclusive screening of episode one and a question and answer session with fans.

The Lego Peaky Blinders model will be on display in Legoland Discovery Centre Birmingham’s Miniland over the coming weeks.