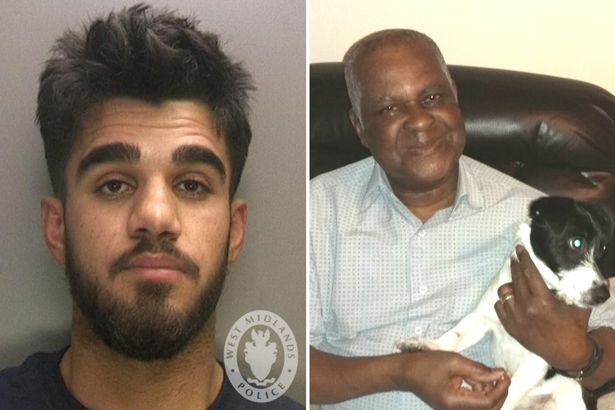 A teenage who killed a great grandfather on a pelican crossing while racing another motorist has been jailed for three years nine months.

Rabin Mahmood was doing over 61mph in a 40 zone in a VW Golf when he ploughed into 80-year-old Hopton Gayle on the A449 Stafford Road last year February.

Mr Gayle, from Aethelred Court, a sheltered housing scheme in Leverton Rise, Wolverhampton, was flung into the air by the impact which smashed the windscreen of the VW and wrecked the front of the car, Wolverhampton Crown Court was told.

Mahmood stopped briefly to push down the bonnet of the car before driving off, leaving the victim to die at the scene in Stafford Road, Oxley.

Mahmood of Bransdale Close, abandoned his car further down the road, putting the number plates in the boot where they were found by police who quickly discovered he was the registered keeper of the car.

He was not at home when the police attended his home, but they left a message and he gave himself up 2 hours later.

The VW and a Subaru Impreza had been weaving in and out of traffic, undercutting other motorists while careering down the busy dual carriageway at around 6pm on February 19 last year, said Mrs Sati Ruck, prosecuting

She continued: “Both slowed down for a speed camera, which unfortunately was not working, before accelerating away again.

“He was travelling at 61mph while under breaking after the pedestrian crossing.”

One of Mr Gayle’s daughters unwittingly walked past the scene after the body had been covered by a blanket, the court heard.

She did not realise the victim had been her own father until 20 hours later.

His widow said: “He was a real gentleman. I have lost not only my husband but also my best friend. I will never forget his smiling face.”

Mahmood, of previous good character pleaded guilty to causing death by dangerous driving, not stopping after an accident and having no insurance.

He was sent to a Young Offenders Institution and banned from driving for four years on release by Judge Simon Ward who told him: “Mr Gayle didn’t have a chance.”