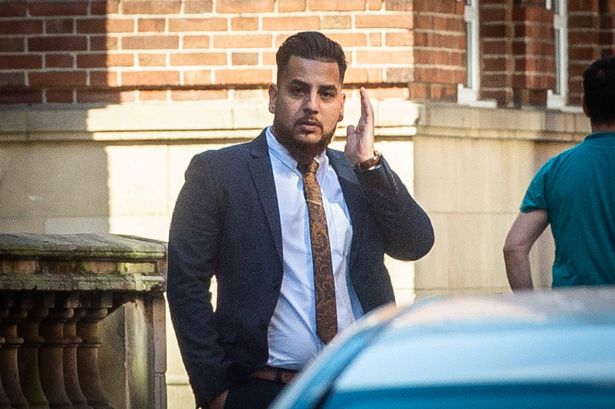 A Halifax bank cashier has escaped being jailed after transferring over £56,000 from an elderly dementia sufferer he had targeted.

Nasir Haider, 30, of Stratford Road, Hall Green made transactions into his own accounts over a three year period to fund his gambling addiction. An investigation found that he had made payments to a gambling company of over £94,000, Birmingham Crown Court heard.

The judge said he had taken into account the effect of a jail sentence would have on his family.

Haider, who had previously admitted theft, was sentenced to two years suspended for two years and ordered to do 250 hours unpaid work. Phillip Beardwell, prosecuting at Birmingham Crown Court, said the pensioner banked at a branch of the Halifax in Acocks Green where Haider worked as a cashier earning just over £15,000 per annum and who had been there since 2011.

The 78-year-old victim suffered from Parkinson’s, arthritis and diabetes which made it difficult for him to get to the bank.

Whilst going through bank statements it was apparent that substantial sums were missing which lead to an investigation.

The investigation uncovered a total of 54 suspicious transactions over a three-year period amounting to £66,300 and that Haider cold be linked to 43 of these through his unique file number.

There was CCTV evidence on October 19, 2017 of the defendant taking £2,200 out of the victim’s account when he was not present at the branch.

Mr Beardwell said investigators discovered that Haider had been transferring the cash to his current and saver accounts by using the deposit machine at the bank. When quizzed Haider denied the offence saying he rated himself “10 out of 10” for competence in his job and claiming that £25,000 had come from an inheritance.

In passing sentence Recorder Martin Jackson said Haider had taken money from the customer which should have been used for his living expenses “for his selfish purposes” and that he had “targeted a vulnerable victim.”

However, he took into account that the defendant had a one year old child, that he was the sole bread winner and that he had raised funds to pay the money back. Babir Adris, defending, said Haider had felt under pressure following the death of his father.

“His escape was not drink or drugs but gambling. He thought that was his way out,” he said.