Home Latest Vloggers Are Resorting To Extreme Pranks To Get Clicks 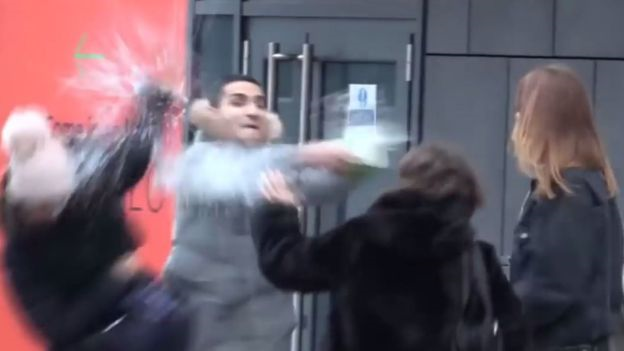 YouTuber Arya Mosallah’s video channel had more than 650,000 subscribers before his career came to a halt after he posted a video tilted “Throwing Water On People’s Faces PT. 2”. The video shows him approaches several people, and after a brief conversation, he throws a cup of water in their faces.

So many viewers thought the prank in the video looked like an attempt by the British social media star to mimic an acid attack which has had a recent increase in such crimes in London and across the UK.

After this video You Tube deleted the channel and Mosallah set up another channel to continue producing prank videos.

Arya Mosallah is most definitely the not the first YouTuber to get into trouble for prank videos. Youtuber Logan Paul has posted videos causing controversy joking about suicide victim to his young audience.

Extreme pranking videos has become a rise and is getting more coverage from news outlets. Youtubers have been faking bomb attacks and murders, tricking and frightening friends and members of the public to increase their online views.

A body language and behavioural expert Judi James examined the water-throwing video, and she said the clips “look as though they’ve been staged”

“There’s usually the moment of shock… but in this case (the victims) almost straight away start running after him. One guy even leaves a large bag on a park bench which is probably counter-intuitive.

“I’m guessing they’re not all what they seem to be although some of them might be,” she says.

As YouTube becomes increasingly saturated with young people trying to make their name in on a rapidly developing platform, some have turned to extreme ways to get attention, rack up clicks, and – under YouTube’s advertising-reliant model – get paid. Extreme pranks are one way to cut through the noise.

“It’s probably the most sadistic form of comedy,” James says. “Every day we get bombarded with more and more graphic films of cars crashing, terrible events taking place, and even people dying. Once you start to break the barriers and look at those then the idea of seeing comedy that is actually quite sadistic becomes even more appealing.”

“A lot of it is schadenfreude – it’s a bit like bullying at school, you’re almost laughing tinged with a relief that ‘it’s not me.’

“The other thing to think about is the fact that the pranksters themselves can actually suffer from doing the pranks,” James says. “Longer term. empathy has a way of catching up with us. Either you have no empathy at all which is quite unusual, or you are often going to get flashbacks about all those people you have upset”.