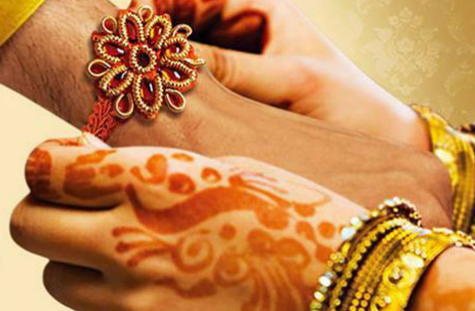 Raksha Bandhan is a Hindu festival that celebrates the bond of sisters and brothers and remind one another how important they are too eachother.

Here’s everything you need to know.

What is Raksha Bandhan?

Can also be celebrated by close friends, who are considered to be part of the family structure also celebrate Raksha Bandhan.

When is Raksha Bandhan?

It depends – this year it is Monday 7th August but the date varies because it is traditionally celebrated on the full moon day (Shravan Poornima) in Shrawan, the fourth month of the Hindu lunisolar Nepali calendar.

How do people celebrate Raksha Bandhan?

The rakhi represents a sister’s love and prayers for her brother, and the brother’s promise to protect her.

Brothers and sisters often exchange gifts – anything from cards, clothes and money to computer games.

It is celebrated by Hindus across the world. It is especially a big deal in India, Mauritius and Nepal.

What’s the history behind it?

Several Hindu legends have mentioned it in the sacred thread.

In the Indra, king of the Hindu gods, the thread was pivotal in winning back his home when a demon king invaded.

This act helped him reclaim Amaravati (the home of the gods).

How did it end up being about brothers and sisters?

Raksha Bandhan celebrations were encouraged by writer Rabindranath Tagore as a patriotic act against British rule in Bengal.

Tagore used the ceremony as a way of getting boys and girls involved in the freedom movement.

Now it is generally just an act of sibling love – a way of wishing a brother longevity and a promise that a sister will get her brother’s support.