For those who suffer from Irritable Bowel Syndrome, or IBS, which is an estimated 10-15% of the global population, it’s an uphill battle often marred by uncertainty, stress and pain. In the  UK, approximately nine million people suffer from the syndrome, an illness that causes severe abominable pain, bloating, daily discomfort, constipation and more.

We talked to one young woman, Sanoobar Patel, who suffered IBS, received little to no help from doctors, and thankfully found help in Alflorex, a probiotic food supplement that targeting gut bacteria.

When did you first become aware that something was wrong internally?

When I first started experiencing early symptoms of IBS, I didn’t attribute it to being anything actually being wrong with me. After I got married three years ago, I first started to experience bloating and stomach cramps. They were painful and made my stomach rigid. As I had just got married, I put it down to stress and being overtired adjusting to my new life.

I started to experience stomach pains. These left me very drained as I was unable to sleep

What were the symptoms like and what did you initially think was  wrong?

Every time I ate too much dairy or carb loaded food, I started to experience stomach pains. These left me very drained as I was unable to sleep and it was very uncomfortable. Initially, I thought I was my diet. I had been travelling and it is not always easy to find healthy food abroad as I am a vegetarian. I thought the amount of highly processed food I was eating was causing my symptoms.

How was your experience with your GP when you approached him/her?

After almost a year of suffering the symptoms, I decided to seek medical help and see my GP. My GP did not seem to be bothered by it and said it could be down to stress making me overly tired. She initially suggested that I try taking probiotics over the counter. I tried these over six weeks and still did not see a big difference. I went back to my GP and she suggested that I go on a low FODMAP diet. When I saw what I couldn’t eat, I was shocked. I am vegetarian and it pretty much cut out most of what i could eat.

Your body is fighting you every step of the way and the tiredness really does make you feel like you should just stay in bed all day. People don’t understand the effect IBS can have on your life

Were there any mental side effects of the symptoms, and not knowing the cause behind them?

I kept feeling so tired and drained all the time. Some days I wouldn’t even want to get out of bed and out of my sweatpants because wearing anything constricting around my stomach made me feel more uncomfortable. I felt so stressed out because I honestly thought that I would have to stop eating everything I liked eating to cure the way I was feeling. 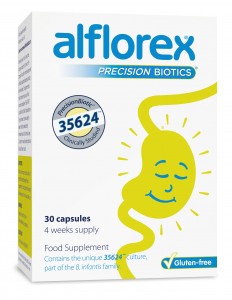 How did  you  come across Aflorex?

I met the Alflorex team at a blogging event who told me in great detail about how Alflorex was different. The probiotics would target the bacteria in my gut rather than in my stomach. I explained that probiotics were really not helping me and had in fact made me feel worse but the team insisted that this would make a real difference.

Were you initially sceptical?

I was very sceptical. I don’t even take supplements let alone taking probiotics on a regular basis. However I found the concept of targeting my gut bacteria interesting and thought that I have tried everything else so this can only help me.

Months later since using Aflorex, how are your symptoms now?

I have been on Alflorex since nine months and my symptoms are so so much better. I can’t begin to say how much of a difference it has made in my daily life. I honestly felt that I would be suffering the symptoms forever and there would no cure apart from cutting down my diet to the bare minimum. When I get flare ups of my symptoms, I do take Alflorex twice a day and it immediately gets to work and makes me feel so much better.

IBS is still something very embarrassing to talk about, who wants to talk about having issues going to the toilet and stomach cramps with their close friends and family? It does feel like your body is fighting you every step of the way and the tiredness really does make you feel like you should just stay in bed all day. People don’t understand the effect IBS can have on your life. It is not a vanity issue like I was told, that I thought I looked fat, it is so much more than that. More people, especially women, need to talk about IBS as it is can have a huge effect on daily life and everyday routines which can impact on the people you love.