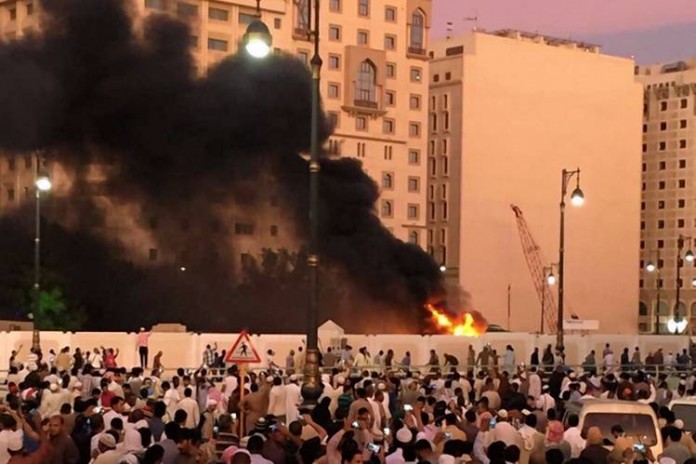 Four security officers have been killed and five others have been injured in a suicide attack right outside one of Islam’s sacred sites.

The attack occurred on Monday 6 June, before sunset prayers before people were breaking their fast inside the mosque at the Prophet’s Mosque in the city of Medina. It was the third attack in the kingdom, following explosions in the cities of Jeddah and Qatif.

A large number of photos of Medina posted on social media displayed smoke wafting out from a fire outside the mosque where Prophet Muhammed (PBUH) is buried.

The ministry said on Twitter: “Four security guards were martyred and five others wounded as a result of their opposition to the suicide attacker who detonated explosives near them as he was on his way to the mosque.”

The mosque is known as Al-Masjid an-Nabawi and is visited by pilgrims from all corners of the world during the concluding days of Ramadan, the month of fasting.

36-year-old Qari Ziyaad Patel, from South Africa, was present at the mosque when he overheard the blast just as the call to prayer was ending.

He said initially, many thought it was the sound of customary, festive cannon fire, until they felt the ground quiver.

Mr Patel also added: “The vibrations were very strong. It sounded like a building imploded.”

The mosque is one of Islam’s second holiest sites after the Sacred Mosque also known as Masjid-al-Haram, which surrounds the Kaabah in the city of Mecca.

Following the attack in Medina, Muslims around the world voiced their outrage.

Iran’s Foreign Minister Javed Zarif, writing on Twitter, said: “There are no more red lines left for terrorists to cross. Sunnis, Shiites [Shias] will both remain victims unless we stand united as one.”

Mohammed bin Zayed al-Nahyan, the Crown Prince of Abu Dhabi, tweeted: “It’s time we work together to save our religion from these deadly criminal gangs.”

At a similar time as the Medina blast, two other explosions hit a mosque near the eastern city of Qatif on the Gulf coast.

Witnesses reported that a suicide bomber blew himself up outside a Shia mosque but did not cause any other causalities.

They reported seeing body parts lying on the ground in the city’s business region.

A resident said: “Suicide bomber for sure. I can see the body.”

Nasima al-Sada, another resident, said: “One bomber blew himself up near the mosque.”

Earlier on Monday morning, two security officers were wounded as a suicide bomber blew himself up close to the US consulate in the Red Sea port, in the city of Jeddah.

There have been no statements to claim responsibility for the attacks.