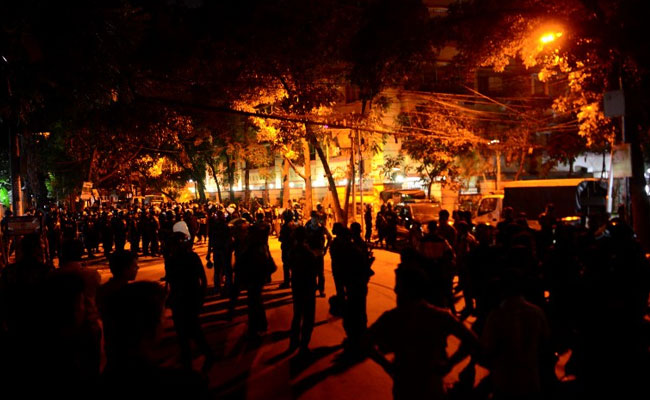 Hostages were held for a 12 hour ordeal at a bakery in Dhaka, Bangladesh. The bodies of 20 victims killed during the event are yet to be identified by authorities. The nationalities of the victims are as follows: seven Japanese, nine Italians, one Indian, two Bangladeshis and one U.S. citizen of Bangladeshi origin.

They were killed by stabbings and hackings.

Bangladeshi media stated that gunmen entered the café and fired their guns at 9.20pm. A member of the kitchen staff, Mohammad Jasimuddin, recounts, “There were about 50 to 60 staff inside. These people came and opened fire. We thought they were dacoits [bandits] and would leave after looting money and valuables.

“I heard them screaming Allahu Akbar [God is great] and firing shots. We thought they’d leave in 15 to 20 minutes, instead they went upstairs to the second floor [that was] under construction. They were firing from there.”

Customers hid under tables and chairs, a group of 8 civilians were locked in a bathroom by the gunmen after hiding there.

The police, who reached the spot within 7 minutes of the incident, were fired at by the gunmen. A local police station chief, Mohammed Salahuddin, was tragically killed in the gun fire along with another officer, Ashraful Karim, the assistant police commissioner and Salahuddin’s immediate superior.

A surprising twist is that the attackers were recognised and known by many after their images spread online.

“What’s really puzzling is the background of these attackers,” said Faiz Sobhan of Dhaka-based think tank, Bangladesh Enterprise Institute. “They were normal regular guys who hung out at cafes, played sports, had Facebook pages. … This is a new trend in radicalization.”