Home Sports We Can Play 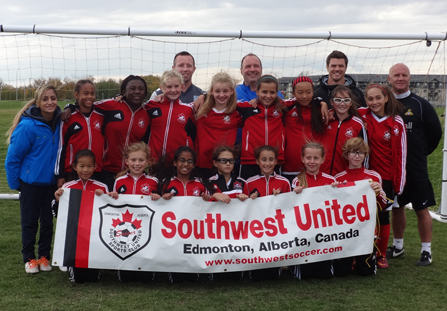 Last weekend as I gazed across the Canadian football pitches, home to South West United in Edmonton, and saw a number of girls making their way towards the coaches eager and ready to begin their session, I took a breath and smiled.


These girls were buzzing with excitement and illustrated much confidence in front of the boys’ teams that were also present over the two days. Despite this sureness in their ability, it soon became apparent to me that the visibility of female coaches working with these players was to be of the upmost importance.


I reflected upon the ‘We Can Play’ campaign launched by The FA to help shatter pre-conceptions about women and girl’s football.


Despite it being the largest team sport for girls and women in England, just over half of those spoken to in the research felt that football was a game for them and from those that play; four out of five of them do not feel confident in doing so. Here it hit home and I understood the power of acting as a positive role-model, being a female coach working with female players.


Due to peer pressure, gender stereotyping and even derogatory comments on the women’s game research has revealed it is holding back greater participation of women and girls in football. On the contrary to this statistic, my weekend in Canada saw me work with just over 100 girls aged between 10 – 17 years old all of whom participate in competitive football on a weekly basis. In fact the club consists of 370 signed players and run parallel teams for the boys and girls section which certainly poses a question to that ‘pre-conception’. These girls definitely feel that they belong.


This international coaching trip confirmed something I had thought of previously when working with female players in London, the position I hold as an educator, as a coach and as a female working within the game. We have much influence over those that we come into contact with and I feel I have a moral responsibility to help encourage and empower more young girls and women to participate in the national game.


Perceptions must be challenged as women’s football is growing in profile and professionalism. Many of the girls in Canada spoke highly of the Women’s Super League with one player determined to play for Arsenal Ladies. My reply to her was simple, “If you have a dream, go for it!”


It was an honour to be amongst passionate motivated girls who displayed great drive for wanting to learn, but more so, wanting to play.

We should take inspiration from this and the ethos that South West United has embedded.

Woman attacked with acid in front of children

How long does it try erase POF accounts?

Now that you’ve check out this Instabang assessment, is there anything else you’ll need to work with the internet site?

15 Bible verses to strengthen their union with Jesus