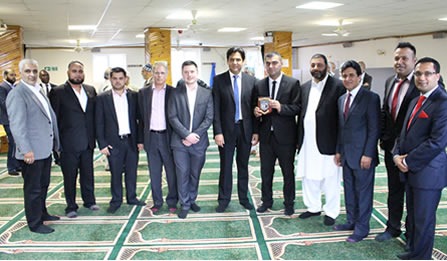 Local community champion, Mohammed ‘Zaf’ Zafran, has been awarded a special accolade to commemorate his dedication to the city. The award adds to his already growing collection of recognitions which includes a Sir Bobby Moore trophy and a National Diversity Award.
Organised by the community around him, the event was arranged to celebrate the achievements of the South and City College security guard who has been able to create an organisation dedicated to helping young people into education and employment.
The story of Mohammad Zafran is no secret. Having lost his sister and brother in-law in the space of one year, he managed to challenge his grief and anger in transforming the lives of young people across the Midlands.
His remarkable dedication and courageous actions in promoting motivation and competitiveness in youngsters has led Zafran to make a positive impact on more than 10,000 young people across the region. By involving youths who would have otherwise been up to no good in the streets and parks of Birmingham in sports and education, he has kept them busy and out of trouble.
Out of the 150 people that were present, in attendance at the event were local dignitaries, which included, MP Jess Phillips, Birmingham Councillors Ansar Ali Khan,Waseem Zafar, Majid Mahmood and Brett O’Reilly, as well as Pride of Britian winner Tariq Jahan, Balsall Heath Forum manager Abdullah Rehman, South and City College representative, including Principal Mike Hospkins, and Asian Business Chamber of Commerce Vice President, Waheed Saleem.
Speaking to The Asian Today, Zaf said, “I feel honoured that the local community and all these influential people came out in numbers to celebrate with me the journey I have been on from project 1 to 100.
“I have been very fortunate with all the recognition I have received for all my work which has changed thousands of lives. My aim was to change one or two youths but to make this much of an impact on so many people was never imaginable.
“It was also a proud moment to be given the Lord Mayor Award and also pleasing for me to have the SCCB Principle Mike Hopkins present as his the President of All 4 Youth & Community and the team of Asian Today who are Ambassadors and have supported my venture from day one with all their coverage and bringing my story to all the nation. I would also like to thank all my family at this time as a lot of blood and tears have been shed during this journey and all this would not have been possible without their continued support.”