US Police Identify No Suspects 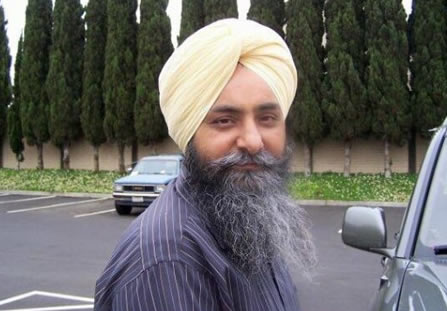 The Sikh community across the world have expressed their shock and sadness at the murder of Satwinder Singh Bhola, (52) the son-in-law of human rights activist, Bapu Surat Singh.
Khalsa, an 83-year-old Sikh from Lathrop, CA, has been conducting a hunger-strike in India for the past seven months in demand for release of political prisoners. Californian Priest, Fr. Joshua Lickter, who regularly leads his Roseville, CA congregation in prayers for Khalsa, praised him at a May 22 rally on the steps of the California State Capitol, saying, “He starves himself because he himself is starving for justice.” The Christian priest has spoken for Khalsa on several other occasions and even met privately about the matter with his representative, Congressman Tom McClintock, so he was swift to respond to news of Bhola’s savage murder.


Shortly after 12am on Monday morning, police in Peoria, Illinois discovered Bhola, a 53-year-old father of two, stabbed to death in the parking lot of his apartment building. With a large amount of cash left undisturbed in his pocket, the motive for his murder does not seem to be robbery.

Gurjeet Singh, press secretary at the Sikh Federation (UK) said the motive is suspicious. “There is growing speculation across the global Sikh community that agents of the Indian authorities sanctioned the murder of US citizen, Satwinder Singh Bhola in Chicago.
“Robbery has been ruled out as he was carrying around $2,000 and a blank cheque that were not taken. Threats of this sort by the authorities were made public by Bapu Surat Singh hours earlier. He has been increasingly pressured to end his hunger strike and this shows the Indian authorities are prepared to take extreme measures and even kill on US soil.”
Fr. Joshua Lickter, added, “The details surrounding his murder strongly suggest a connection between his death and his family’s peaceful protests against the Indian government. I am both saddened and outraged by this senseless act of violence.


“I grieve for Bapuji’s daughter, Bhanji Sarvarinder Kaur, and the incredible pain she and her entire family must be feeling right now. I pray that she and her family would be comforted in their time of sorrow and that whomever is responsible for this horrific act would be apprehended and brought to justice.


“I also call on other leaders in the American Christian community to become more educated about Bapuji Surat Singh Khalsa’s plight and the plight of all who are currently experiencing persecution under Prime Minister Modi’s regime.”

Bapu Surat Singh responding to the tragic news of his son in law’s murder saying “Satwinder Singh Bhola was closer to me than my own son….but closer still are those Sikhs languishing in prisons, this incident will not affect my resolve or determination for the cause to free Sikh political prisoners.”
Mr Singh was stabbed in the neck. Autopsy results showed an incise wound to the neck more than 8 inches in length proved to be lethal, according to Peoria County Coroner Johnna Ingersoll. Bhola bled out at the scene.
No arrests have been made, and police did not publicly identify any suspects.