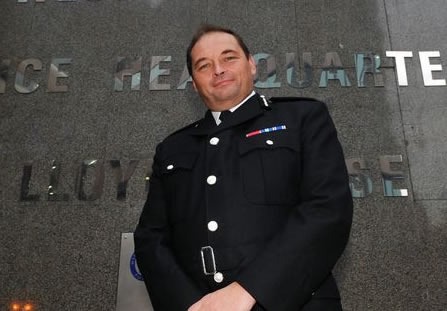 A review of neighbourhood policing is underway as part of the West Midlands Police WMP2020 change programme which will see ‘significant cuts’ to neighbourhood policing.
The neighbourhood review will look at how local policing will work from 2020 and beyond against a continued backdrop of financial austerity – whilst trying to save £120 million.
The force has to make anticipated savings of £130m over the next five years.
With over 80 per cent of operating costs coming from pay budgets the force is facing further workforce reductions in the region of 2,500 over the next five years – making the organisation smaller than when it was formed in 1974.
The final financial budget is due in the autumn but planning is advanced through the WMP2020 programme.
Chief Constable Chris Sims said: “By 2020 WMP will have reduced by almost 45 per cent over a decade. I am confident though that policing will continue to protect the public but how services may look and be delivered will have to alter – both to respond to the financial challenges we are facing and to new and growing threats like child sexual exploitation and online crime.”
An early phase of the WMP2020 work stream, due to report back in October, is looking at how calls will be responded to and investigated and how neighbourhood policing will continue to be delivered.
A key feature of this will include the role of police community support officers (PCSOs).
For the force to be able to continue to protect the public from 2020 there will need to be a critical mass of warranted police officers to deal with the full range of policing challenges across the West Midlands.
At the same time there will be a limit as to how far critical areas of policing such as call handling and forensics managed by police staff can be reduced without impacting on safety or the ability to investigate crimes.
As a result of these pressures PCSO numbers could reduce at a faster rate than the reductions in officers and other police staff over the next five years.
This is the first time the force has carried out a wholesale review of PCSOs in terms of their role, numbers and deployment since their inception – unlike other areas of the force.
Chief Constable Chris Sims said: “The WMP2020 Blueprint is about building an effective and affordable force for the year 2020.
“The autumn won’t see a suddenly different force but we will be able to outline to the public and begin testing, our proposed new ways of working.
“We are clear that we are not pulling away from engaging with the public or from having a uniformed presence on the street – the current phase of work is designing what that engagement might look like.
“We haven’t finalised our eventual numbers of PCSOs but it is clear there will need to a significant reduction in the numbers between now and 2020.
“We will be working hard to ensure this is managed in a way that does not diminish the delivery of a policing style that is firmly connected to the communities we serve.
He added: “I know many PCSOs are highly valued by the public and colleagues. We will, as we have with all our staff, do all we can to find other roles for them in the force and will be looking at how we can ensure they are able to apply for police officer posts as part of our current recruitment drive.”
Police and Crime Commissioner David Jamieson said: “Neighbourhood policing is key to our relationships with communities. However, in the face of growing pressure on our services, the force will have to look and feel different to respond to crime in the future.
“I support the professional and thorough approach the Chief Constable is taking.”