Explains How He Rescued From Burning Building 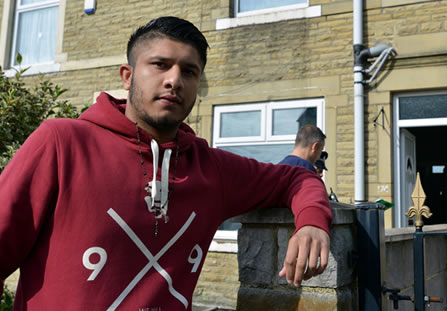 A young man has been praised for running into a burning house to rescue a three-month-old baby.
Aamir Nawaz had been outside his house in Bradford when he heard a scream coming from one of the nearby properties.
A fire had started in a bedroom of the terrace house, home to a family of eight, and the 22-year-old, was alerted by the mother’s screams of distress.
Describing the rescue which took place late on Thursday night, Mr Nawaz said: “A friend had just dropped me off when I heard a lady screaming.
“When I got into the house she said ‘my baby is sleeping upstairs’ so I had to go and save him.
“I carried the baby out of the room. It felt like I had a new life.
“The window was closed so there was a lot of smoke building up. I had a jumper on so I pulled it over my head to stop the smoke. I would have been overcome by the smoke if I had stayed there any longer.
“When I was outside with the baby people were telling me ‘well done’ for what I did. The father said ‘I don’t know how I’ll ever repay you’.”
Firefighters were speaking to families in the area yesterday to ensure they have fire safety measures in place.
Aldene Woodward, watch commander at Fairweather Green, said of the severity of the blaze: “It was quite bad. The family has been displaced now.
“The cause of the fire is being investigated by the fire investigation team and the police.
“A significant amount of smoke spread around the house, it caused enough damage that the family wouldn’t have been able to stay in the house. We called a Red Cross crisis team to help with the family.
“We will be checking on all properties in that area, offering fire safety advice and making sure all homes have working smoke alarms.”