Sitting down with DesiXpress, she talks music, her journey and the future

Rishi Rich has delivered yet another amazing singer and songwriter in the form of Serena. South Indian born Serena Kern, who currently is having a highflying career as a lawyer in a top London firm, somehow still finds time to do her daily voice exercises.

Serena is from Tamil Nadu and is half-Swiss. Consuming various genres of music, it wasn’t until she got to university and began singing at open mic sessions that she discovered how in love with music she really was. Sitting down with DesiXpress, she talks music, her journey and the future.

Your new single Dream tell us about the song and where did the idea come from?

I flew to Atlanta to work with Rishi on this EP and the idea for Dream came to us when we were in his studio. Rishi was playing with some ideas and the sounds he was coming up with were really bubbly and vibrant and that is when the idea of Dream came about. The sounds conjured up memories of my teenage years and the song is a throwback to when I was a teenager.

Tell us your journey with Rishi Rich and what is he like to work with?

Rishi is obviously very talented (but I don’t need to tell anyone that!). As a person, he is just a really nice, down to earth kind of guy. As an artist, it is so important to find a producer who is encouraging and supportive, and Rishi is just great that way!

Tell us about your journey and how did you get into music? 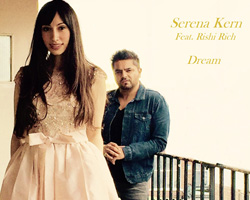 Music has always been a passion. It started out as something I enjoyed doing at home (I used to put up little plays for my family when I was a child). I became more serious about music when I started university and this was when I started writing and recording my own songs. The reception was very good and I was invited to collaborate with a producer in south India on a few tracks. I was encouraged by this and from here music started to take on a life of its own and I have eventually found myself working with Rishi Rich!

What is it like going from a high profiled job to the music industry?

There are many overlaps between being a lawyer and being a musician. As a lawyer you learn to be careful and concise with language and words and as a songwriter, this is very important too. I have developed various skills in each job that I put to use in the other!

How do you manage to the balance life as lawyer and a singer?

I always say that music is something that just comes naturally and is a real passion of mine. I don’t really think about music as something I have to make time for or put in my diary as it is something I am always thinking about…it is an intrinsic part of my personality.

You write your own lyrics – where do you get the inspiration from?

The lyrics usually emanate from an emotion I am feeling. For example, when I wrote Dream, the lyrics were inspired by the emotion that Rishi’s music was conjuring up. I take inspiration from the little things in life, the moments I feel would be lost forever unless I captured them somehow.

Growing up who did you enjoy listening to and who has inspired you?

Growing up, I was blessed to be exposed to a variety of music and sounds, from south Indian Kollywood to Bollywood film songs as well as an array of music my father used to bring me from his travels overseas. As a child you tend to absorb everything and, to this day, consciously and unconsciously all these sounds come together in my music.

You have worked with Rishi Rich. Is there anyone else you would look at working with?

Working with Rishi has been amazing and we have really bonded well. You can work with the best in any filed, but if there is no connection and you are not able to bond, the outcome will never be great. Rishi and I work so well together and our working styles are so similar- both of us are perfectionists but at the same time are ruthlessly efficient! I want to explore further where our relationship will take us!

What is next for Serena?

Rishi and I have been working on promoting Dream, but at the same time are excited about what we have created so far and want to test the waters with more new sounds and ideas. With Rishi at the helm, I want to explore the unchartered territories in music, creating sounds that are fresh and yet have wide commercial appeal.

City or Countryside – I grew up surrounded by jungles – definitely Countryside and the Outdoors!

Comedy or Thriller – Thriller…until I get too scared to watch…at which point I will switch channels to watch a Comedy!


Sweet or Sour – Definitely Sour! I’m half Swiss but have never been a fan of chocolate. We have a garden at home with an apple tree and one day a friend of ours observed me picking all the green apples and leaving the ripe ones. He thought I was colour blind!