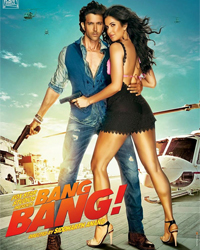 When Rajveer slips an important device into Harleen’s bag, she gets tangled in a world outside her sphere.

The film chronicles their attempts to survive and clear their name in this Bollywood spy rom-com.

The film is the official remake of the Hollywood flick Knight and Day which starred Tom Cruise and Cameroon Diaz.

Bang Bang has been directed by the Siddharth Anand who gave us films like Bachna Ae Haseeno, Anjaana Anjaani and Salaam Namaste all of which did very good business at the UK box office.

Stunt director Conrad Palmisano of Dhoom 3 and Ek Tha Tiger has be roped in once again to manage the action scenes for Bang Bang.

Another Hollywood director was employed to coordinate a car chase involving around 120 cars in Abu Dhabi.

Produced by Fox Studios all visual effects work has been carried out by technicians based in Los Angeles to give it that slick Hollywood look.

Even the song sequences have some sizzling dance moves from Hrithik and Katrina. Watch out for the title track which shows Hrithik paying homage to Michael Jackson’s unique dance moves.


On the whole Bang Bang promises an edge of the seat excitement and adrenaline pumping action sequences as our sexy duo fight against all odds to clear their name in the eyes of the law.