A road has been closed by police when protesters staged a demonstration at a factory near Sutton Coldfield. 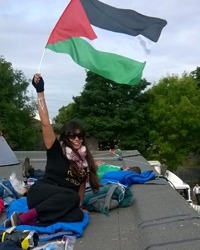 Lynn Lane at Shenstone was closed on Tuesday morning by police after protesters occupied the UAV Engines factory roof.
UAV Engines is a subsidiary of Elbit, an Israeli defence systems company, and the company’s website states that the factory is involved in the production of “engines for various size tactical UAVs, target drones and single mission platforms”.
The London Palestine Action group claimed responsibility for the demonstration, demanding “the permanent closure” of the factory and “an end to all forms of military trade and co-operation with Israel”.
The factory’s production of drone technology which are claimed to be used in Gaza has led the site to be a target for protests on previous occasions. A peaceful demonstration was held in 2009 by members of the Gaza Solidarity Group which protested against the company’s involvement in the Israel and Palestine conflict.
Sara Cooper, a 26 year old teacher from London, joined the protest and said: “This factory is the clearest example of the vast military co-operation taking place between the UK and Israel.” 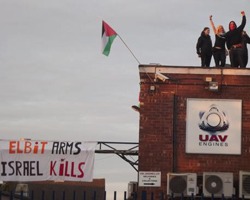 The protesters posted pictures on Twitter which showed a banner draped over the edge of the building which read: “UK: Stop Arming Israel” with another stating: “Elbit Arms Israel Kills”. Other photos showed police and fire crews at the scene.
A Staffordshire Police confirmed their attendance at the scene and a spokesman stated: “We are working closely with the business and the protesters. As a result of this activity we have cordoned off Lynn Lane”. “The safety of our officers, the business staff and the protesters is our priority.”
Though the protesters had chained together the factory’s doors, the police managed to enter the building. The group said on Twitter: “We’re staying put as long as it takes” and “we have supplies to last a week.”