Grandad Buys a Billboard to Highlight Suffering of Palestinian Children

A grandad from Leicester has printed his own billboard and parked it in a Birmingham street to highlight the suffering of children in the conflict in Gaza. 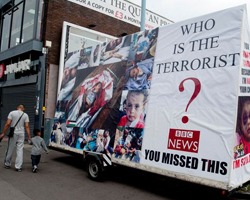 Saleem Mohammed took a stand against the British media’s coverage of the conflict between Israel and Palestine, stating that he was “very disappointed in the media.”
“When you see children being bombed in schools and hospitals, no words can explain how this makes me feel.”
His billboard aims to bring to the public’s attention the atrocities suffered by Palestinian children at the hands of Israel’s military and he wants as many people to see it as possible.
Displaying images of injured and suffering Palestinian children, the billboard has been parked in a Sparkbrook road for two days.
“My heart bleeds for them. Children are playing on the beach and getting bombed. It is a massacre.”
The 50-year-old grandad had participated in demonstrations in London, but decided to do more when he saw images on social media of the “massacre of children” and decided to do more to highlight their deaths. 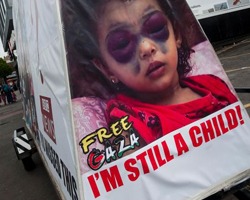 Ten days ago he took matters into his own hands. Purchasing his own billboard, he printed images of injured and suffering children and brought the billboard to Birmingham. He stated: “Birmingham is the Second City so I brought it here to get as much exposure as possible.
“I don’t want to look back in ten years time and think I could have done more. I can’t physically go over there to help them, so this is my personal protest.
“Forget the human rights aspects of this – we wouldn’t treat our animals like this.
“It is not about the politics for me, it is about the children.”
Now Saleem intends to take his billboard around the country to spread his message further.