Home News Appeal for information after robbery at Bescot Station

Do you know these men? 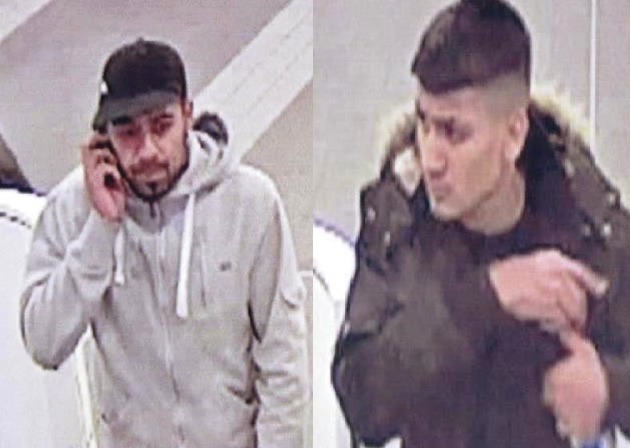 Detectives from British Transport Police (BTP) are appealing for the public’s help to identify two men they wish to speak to following a robbery at Bescot railway station.
Investigators have today released CCTV images of the two men who they believe will have key information that will assist their enquiries into the incident which took place shortly after 10pm on Monday, 16 December 2013.
Detective Constable Simon Taylor, of BTP CID, said: “Two men boarded a Walsall-bound train at Birmingham New Street railway station after being seen to loiter around New Street station for a period of time.
“The female victim and a female friend boarded the same train and travelled through to Bescot station.
“The two men who boarded at New Street, followed them from the train to the over bridge at Bescot station.
“When the victim took her mobile phone out briefly from her pocket, one of the men grabbed the phone from hand. A struggle took place and the second man pulled the strap of her handbag and shoved his hand into her face, causing her to let go of the phone.
“Both men then off across the bridge and fled through the station car park with the victim’s phone.”
DC Taylor added: “Enquiries have been ongoing to identify and trace those responsible but to no avail.
“I’m now appealing for the public’s help to identify the men in these images as I believe they will have information vital to this investigation.
“I would also like to urge any witnesses who were on the train, or who saw anything untoward at Bescot station, to come forward.”
Meanwhile, officers also believe the man in the attached image labelled Bescot 1 will have information which can assist a separate investigation into a burglary at the Delice De France shop on the concourse at Birmingham New Street station.
This incident took place at 7.10pm on Sunday, 24 November 2013.
Do you know the identity of either of these men? Do you have information which can assist officers?
If so, please contact British Transport Police on Freefone 0800 40 50 40, or text 61016. Alternatively, you can call the independent charity Crimestoppers on 0800 555 111.
In all calls, please quote incident reference WWA/B4 of 08/01/14.