Jonathan Waterman ‘on top of the world’ following win 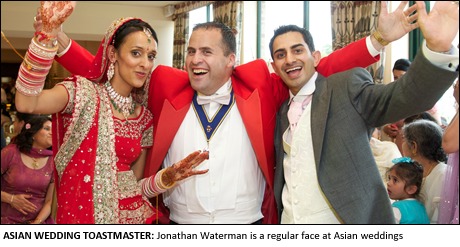 HE’S the man with all the right words at a host of Asian weddings, and now Jonathan Waterman is the talk of the wedding services industry after winning a prestigious award.
The 41-year-old from Barkingside has been named as the regional winner in the ‘Special Touch’ category at the 2013 Wedding Industry Awards for toastmasters.
Jonathan quit his job in IT to become a Toastmaster – and the move has certainly paid off.
“I feel on top of the world,” he told The Asian today.
“All my hard work has paid off and long will it continue. I want to say thank you to all my fellow wedding professionals for making my job that much easier.”
Life was all so different for the 41-year-old who worked in IT before a friends wedding in 2008 changed his life.
He said: A very old friend of mine had his wedding reception in a venue in Hertfordshire. At the time I was not a Toastmaster or Coordinator or Master of ceremonies, and it had not even crossed my mind to be even become one. However a series of events really made me change my mind. I was a guest at this wedding and I noted the emotions of the bride and groom when they walked into the venue for their reception, The room was very dirty, the staff were very rude and unhelpful and the DJ’S were very drunk indeed.
The Best man really did not know what to do so he asked for some help. So I thought I would take the initiative and get the wedding back on track. I had words with the staff and DJ and introduced some little touches I had seen at previous weddings. It all worked out wonderfully in the end.”
Setting up his own company The Complete Toastmaster six months later, Jonathan quickly found himself a regular on the wedding circuit and for the past three years he has become an integral part of a number of Asian weddings across the country.
From bringing together both families to dancing in the Baraat, Jonathan makes sure he is always on hand to ensure the smooth running of the big day.
And with all Asian weddings he’s seen a fair few controversial moments.
He reveals: “A particular memorable experience was of a Sikh Wedding reception at The National Motorcycle Museum in Birmingham, it was cake cutting and cake feeding time. After the Bride and Groom had cut the cake, the bride asked for some friends to come forward. One of the brides friends had a very low cut dress and the videographer in his wisdom could not seem to take his eyes off her. What the videographer did not realize was everything he was filming at this point was being shown on a projector screen for everyone to see. The husband of this girl was not happy at all with what he was seeing, so he decided to come forward in front of everyone, and punched the videographer. He knocked him out stone cold! I could not believe my eyes.”
With his award under his belt Jonathan is in for a busy 2013 having already been booked for a number of weddings across the country.