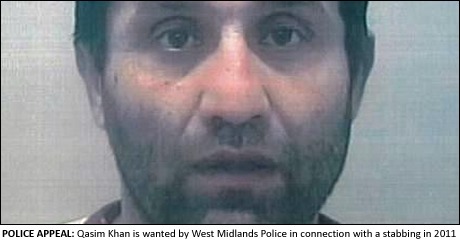 DETECTIVES are re-appealing for help to find a man wanted in connection with a stabbing in Small Heath more than a year ago.
Officers issued an appeal to find Qasim Khan in December 2011, but 15 months have now passed and police are no closer to establishing his whereabouts.
The 36-year-old is suspected of being responsible for knifing a 30-year-old woman who lives in the same shared house on Glovers Road in Small Heath in November 2011.
She suffered life-threatening injuries and, although now fully recovered, was critically ill for some time after being stabbed in the stomach.
DC Rob Clarke, from Force CID, said: “We know that Khan lived in the same shared house as the victim and that he probably fled immediately after the assault.
“We also know that Qasim uses different names, which is why we’re asking people to take a good look at the image we have released.
“We’ve already appealed for the public’s help previously and I’m confident someone will be able to recognise the man we’re looking for.
“This was a nasty assault, which could have very easily been murder and we won’t stop until we’ve found the person responsible.”
Anyone who knows where he may be Qasim may be is urged to come forward and make contact with police at Force CID in Harborne on 101.
Alternatively contact the independent charity Crimestoppers anonymously on 0800 555 111.