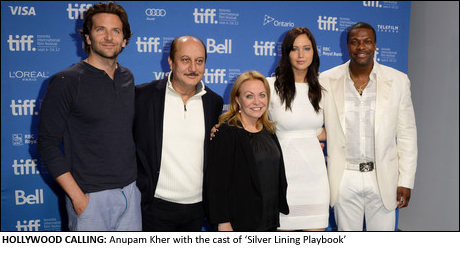 LEGENDARY Indian actor Anupam Kher talks to Sunny Malik for The Asian Today about working in his latest Hollywood film, Silver Lining Playbook along with Robert De Niro and Bradley Cooper.
How did the film come about?
My agent at United Agents, Ruth Young, said that I have to Skype with David O. Russell about a film called Silver Linings Playbook. I had just watched The Fighter and was completely bowled over by it.

I was very excited but was in Rajasthan and had never used Skype personally myself. The first Skype audition went haywire because of technical glitches. Finally, when I was in Toronto, the audition over Skype still did not work out and I had to record an audition and send it over. He liked it and that is how it came about.

There were reports that someone from the hotel helped you out with his iPhone.
Yes, there was a Bangladeshi staff member at the Hotel who helped me out. He was making tea for me and saw me stressed out because Skype was not working. He told me that he has an iPhone and became my DOP (Director of Photography) and director for the audition.

You mentioned you were stressed.  Does that happen when you audition for Hollywood films?
No, I was stressed because of the technical glitch, not the audition. I was not stressed about anything else. If for some reason, they would not have liked my audition or thought that I was not suitable for the role, it would not have stressed me out. Initially, when my agent, Ruth Young, told me that I have to audition, I was slightly offended since I have done so much work. Then I realised that audition does not mean that they want to see the talent, they want to see whether you fit into the concept of the director.
What else do you feel is different about Hollywood from the Indian Film Industry? You recently said that Hollywood is more disciplined.
There is no reason for me to run down my industry while praising someone else. They are a little more professional and advanced. The status of the Indian Film Industry was given by the Government just about six to seven years ago. It took us a lot of time, and even for the corporates to come in. In Hollywood, they are more focused and you have to be qualified to do a job. In India, anyone who has the money can produce a film. There are a lot of differences in that sense. But we are reaching there.
Indian actors are mostly typecasted in Hollywood films and have short roles. Do you think that needs to be changed?
My role in Silver Linings Playbook is a perfect example that it is not true. Even in India, white actors get typecast. We show them as extras in parties thrown by rich people, but we also show them in important roles such as in Lagaan. It really depends on the director and what he wants.
How was your experience working with the likes of Robert De Niro and Bradley Cooper?
I was very excited. Robert De Niro is my all-time favourite actor and sharing screen space with him was an exciting experience. I was also excited when I first worked with Dilip Kumar and Amitabh Bachchan. Excitement is what your real self tells you. Just because I have done 450 films, does not mean that my excitement levels dies down and I don’t pretend it either. It depends on what you want to be a as a person. I always wanted to be original and an original Anupam Kher will be excited. I don’t take myself so seriously that I have to pretend anything. If I am excited, I will go all out. I am the first actor from India to work with Robert De Niro. The director, David O. Russel, has worked on some amazing films and excitement was a very natural process. I am very proud to be a part of Bend it like Beckham but such films have an Indian value, which is interesting and honourable. But to do an all-out American A-list Hollywood film, where an Indian character is playing an important role, is a different thing. I am the first Indian actor to play a major role in a big film. My agent has managed to get me the top-billing, which is fantastic.  It’s a thrilling experience to see my name with these people. It was also a great learning experience. It is fantastic to work with people whom you have admired. It reaffirms my faith in my autobiographic play title; Kuch Bhi Ho Sakta Hai (Anything can happen). An actors’ education never stops. You have to work with people you don’t know to learn more. Also in a way, I am representing my own country out there and I want people to notice my performance.
How was it like watching the film at the London Film Festival?
It was a great feeling for me to watch the film at the London Film Festival as it was the surprise film this year. David and Bradley were taking part in a Q&A session and I was in the audience as a special guest. The kind of applause I received after the screening and when they mentioned that I am around was amazing. I was in Leicester, shooting for Yamla Pagla Deewana 2, and just came to London for the screening.
The film has screened at several festivals around the world and Anil Kapoor said that he is confident of the film being a front-runner for an Oscar nomination. How does that feel that you and the film are being appreciated?
My reference point is my childhood. I grew up in a small town in Simla in the state of Himachal Pradesh, North India. When your reference point is that and your film is being talked about as a contender for the Oscar nominations, your happiness comes from there. You don’t think I am a National Award winner or I have done 450 films. I feel a richer actor after having acted in this film. I am sure the film will be nominated at the Oscars.
Do you think your work in Hollywood will open doors for Indian cinema in the west?
Every supply depends on demand. There is a possibility of a lot more collaborations now. I will be more visible in the west after this film. There is great exposure Indian cinema and actors now.
Silver Linings Playbook is out now on general release in the UK.