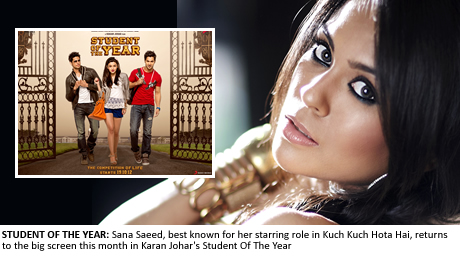 IF you are Bollywood fan, then you will know Sana Saeed from her first feature film Kuch Kuch Hota Hai.
Sana played the role of Shah Rukh Khan’s daughter Anjali in the film which released in the UK fourteen years ago and went on to become a blockbuster.
In her first UK interview, the actress talks to Sunny Malik for The Asian Today about working in Karan Johar’s latest directorial Student Of The Year.
Saeed, 24, plays the role of Tanya, a sultry college girl, in Johar’s colourful coming-of-age tale.
How has the journey been for you from Kuch Kuch Hota Hai to Student Of The Year?
It has been amazing but Kuch Kuch Hota Hai is something I did fourteen years ago. I did not know back then how lucky I was to be working with Karan Johar. I was really just a child and did not really know what was happening. With Student Of The Year, I really lived the moment and enjoyed every bit of it.
You are well-known by audiences worldwide as the little Anjali from Kuch Kuch Hota Hai. Do you think it is difficult to create a new image for yourself?
I was just a child artist in Kuch Kuch Hota Hai and even though people know me because of that, I have grown up and am completely different in Student Of The Year. Karan has really presented me and all of us in the film on a large scale. I really just hope that the audiences like what they see. I believe that I could not have asked for a better comeback than this. I could have done a leading role in any other film but that would not have been as special to me.
Karan Johar films have done exceptionally well in the UK. Do you feel the pressure?
I wouldn’t say pressure but yes, it is a challenge to see how the overseas audience accepts the film. Kuch Kuch Hota Hai is one of Indian cinemas most memorable films for which I am still recognised. I am just nervous to see how people accept the film and obviously I am super curious to know how will I be accepted this time again. I have seen the film and I think it’s a complete Karan Johar movie and one who has loved his blockbusters would really enjoy this one as it is fresh, vibrant and full of life.
Farida Jalal, who played your grandmother in Kuch Kuch Hota Hai, is also playing a role in SOTY. How was the experience for you of working with the same people again after such a huge gap?
I was really excited when I found out that she is playing a character in the film. I really wanted to meet her and tell her that I am the same girl who played Anjali fourteen years ago but unfortunately, I did not get the opportunity. But besides that, I was really happy to be working with the same people I worked with during Kuch Kuch Hota Hai. The hairdresser who did my hair in that film was also working on this one, which was quite surprising. Even Manish Malhotra and make-up artist Mickey Contractor are people I worked with back then. It really says something about Karan that the same people are still working with him after such a long time.
Have you been reading comments about you online as to what fans have to say about you?
I have been on Twitter for the last two years but never really used it. I only started using it a few months ago. It feels really amazing to see that people show you love for a film that released over a decade ago. I get a lot of messages and I try to reply to everyone as much as I can.
A lot of fans also complained that Dharma Productions has not promoted you as much as Varun Dhawan, Sidharth Malhotra and Alia Bhatt.
They are the three leading actors in the film. I am only playing the second lead in the film. I mean, they want people to know the star cast of the film so that they come to watch the film. If they don’t know Alia, Sid and Varun, they won’t even come to watch me in it (laughs). There has been a lot of feedback and I think it is good not to be in everybody’s face. I am unsure about how people are going to accept me. It is better for me to sit back and watch how it goes.
You share a lot of scenes with Varun Dhawan in the film.
I am good friends with Varun in the film which is why I have more scenes with him. I have a lot of scenes around Alia and Sidharth too but not many with them.
You are good friends with Kayoze Irani, Boman Irani’s son, who is also making his debut with SOTY. Tell us something about him.
I had a really good time with him. We have worked a lot together and he is really hilarious. I am sure people will enjoy watching him on-screen. He is just like his father.
What is next for you as an actress?
Right now, I am not looking at anything. I am only waiting for the release of Student Of The Year. I just want to see what kind of feedback I will receive. I am, of course, as nervous as a wreck but If I am welcomed by the audience and appreciated, then I will hopefully get good projects. I just want to enjoy the moment right now.
Student Of The Year is released in cinemas nationwide on 19th October 2012.