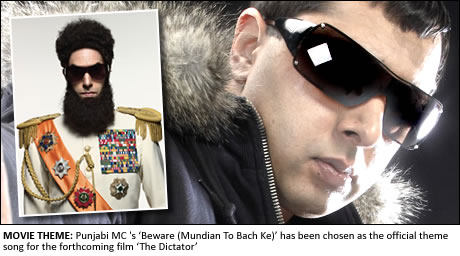 COVENTRY music producer Punjabi MC has scooped another honour – his hit song ‘Beware (Mundian To Bach Ke)’ has been chosen as the official theme song for the forthcoming film ‘The Dictator’.
With the world premiere of the film set to take place at The Royal Festival Hall in London this week, the official trailer on YouTube featuring the hit song has already exceeded 8million views.
A special version of the trailer showcasing the bhangra song was also made for a Super Bowl XLVI commercial seen and heard by a record 111.3 million viewers in the most-watched television show in U.S. history.
The track – Punjabi MC’s most famous record – charted Top Ten in most countries around the world in 1998 reaching the number one spot in Italy and Belgium as well as selling 100,000 units in Germany in just two days.
The success of Mundian To Bach Ke (also titled Beware of the Boys) was taken to another level when rapper Jay Z, a multi-platinum, 10 time Grammy Award winning artist collaborated on the record in 2003.
Some 14 years after it was first released, the track is just as popular today -a fact not lost on producers of ‘The Dictator’ who chose the track as the hugely anticipated film’s theme song.
Speaking to The Asian Today. Punjabi MC said: “It’s been an unexpected privilege. I hope the film is a great success and will be laughing all the way.”
The Dictator, which tells the heroic story of a North African dictator who risks his life to ensure that democracy would never come to the country he so lovingly oppressed, releases in cinemas across the UK and Ireland on Wednesday 16 May.