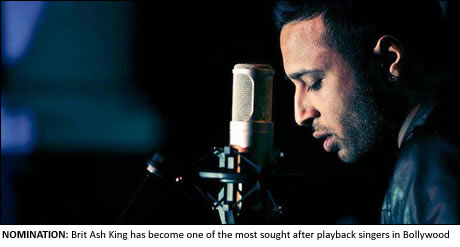 BRITISH Asian singer, songwriter, Ash King has been nominated for a prestigious IIFA award.
The IIFA’s are dubbed as Bollywood’s answer to the Oscars and the event takes place next month in Singapore. As announced by the organisation late last week, Ash is nominated for Best Playback Singer (Male) for his track ‘I Love You’, from last year’s hit movie ‘Bodyguard’ starring Salman Khan and Kareena Kapoor.
Southall-born Ash is up against Rahat Fateh Ali Khan, Mika Singh, Mohit Chauhan and Kamal Khan for the accolade.
Speaking about the nomination a delighted Ash said: “It feels great to be nominated for an IIFA in what was my first big year in the Bollywood industry. I feel privileged to be nominated for Best Playback singer alongside some of the top vocalists of Indian music today and am honoured that IIFA have recognised me in this category.
“This will be my first time going to Singapore for the awards and being British, I do hope all the Brits vote for me so I can bring the award home!”

London boy Ash, who grew up in Southall, has stayed in India for the past few months to record more material, and has already sung on no less than six major Bollywood soundtracks, including work with Oscar-winning AR Rahman and much loved Bollywood maestro Pritam.
His hits have included ‘Dil Gira Dafatan’ (‘Dehli 6’), ‘Te Amo’ (‘Dum Maaro Dum’), ‘I Love You’ (‘Bodyguard’) and most recently ‘Aunty Ji’ (‘Ek Main Aur Ekk Tu’). If Ash picks up the IIFA, it will be his second major Bollywood award of 2012, having already scooped the Stardust award for Best Male Singing Sensation earlier in the year.