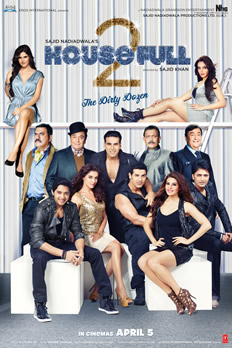 Director: Sajid Khan
Cast: A galaxy of Bollywood mega-stars
This comic caper revolves around four fathers, four daughters and four prospective son-in-laws.
Each father wants his daughter to marry the richest son-in-law. Each daughter thinks she is marrying the wealthiest son-in-law.
Each son-in-law is pretending to be the most affluent bachelor. But each character is flawed and unscrupulous in their dealings.
However, none of these people can stand each other and all of them are living under one roof in the same house!
Housefull 2 marks the second mega-star packed installment in the Housefull franchise by director Sajid Khan.
Sajid always looks for new locales for his films’ shooting. With Housefull 2 he chose the exotic locations of Chile, Argentina and London. He also used Phuket and Hong Kong where the first of the series was shot.
With an A-list of 18 stars in the film it was a mammoth task for Sajid to bring them all together at the same time due to their other filming commitments.
Due to this reason Rahul Khanna had to decline his role but Shreyas Talpade was quick to step into his shoes at the last minute.
Once again Akshay Kumar delves into what he does best – stunts. The opening scene forming an integral part of Housefull 2 sees Kumar parachuting onto the London suburbs captured in detail using six cameras.
Meanwhile during the last day filming of Housefull 2 Ritesh Deshmukh was reported to have turned up for work an hour after his all night pre-wedding celebrations for his wedding to Genelia D’Souza.
As for Malaika Arora she is already making news in the dance sequence ‘Anarkali Chali Disco’ in the company of Akshay Kumar, John Abraham, Ritesh Deshmukh, Shreyas Talpade, Mithun Chakraborty and Boman Irani.
Choreographed by Farah Khan the sequence is a colourful disco song.
With a galaxy of stars, larger than life sets and laugh-out-loud moments Housefull fans will be please to hear that Sajid has announced in the end credits of the film with a caption saying ‘see you in Housefull 3’ !