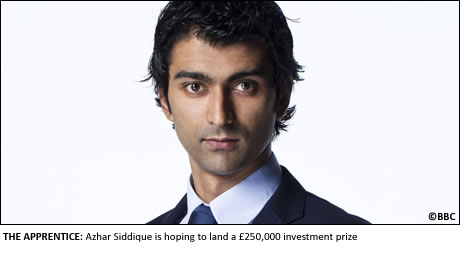 BBC Apprentice hopeful Azhar Siddique has two pet sharks at home – and his razor sharp business skills could lead him to the very top with Lord Sugar.
The 33-year-old from Colne in East Lancashire who is the Founder and Managing Director of Catering and Refrigeration
Company began the show as one of 16 candidates vying for a £250,000 investment prize offered by business mogul Lord Alan Sugar.
And with two candidates having already been booted off the show, Azhar is getting closer to his dream.
His brother Khuram said the Siddique family are confident he has the strength and desire to go the distance.
“He has been a managing director of his own catering and refrigeration firm and has always been very sharp in business,” the 27-year-old told The Asian Today.
“We know he is going to do well and we just want to build up some support for him across the Midlands.”
Thrill seeker Azhar enjoys shark diving and feels his biggest strengths are his professionalism and integrity.
In his spare time Azhar enjoys strength training and
Muay Thai and loves scuba diving due to his passion for marine life.
The 33-year-old who lives in Manchester is inspired by the IKEA brand and admires its founder, Invgar Kamprad, for always sticking to his high self-imposed standards.
Speaking before the show he said: “It’s not who shouts the loudest; it’s who has the ability to control the conversation.”
Catch Azhar on The Apprentice on Wednesdays, 9pm BBC One.