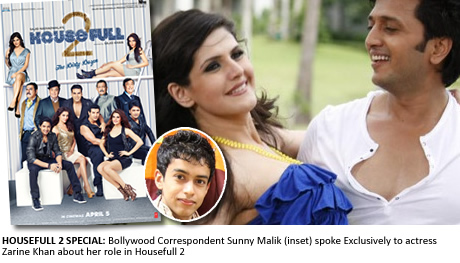 ZARINE Khan, who made her debut in Salman Khan’s dream project ‘Veer’ and was last seen in an item song in ‘Ready’ is back on the big screen with ‘Housefull 2 – The Dirty Dozen’. The 27-year-old actress was quizzed by Bollywood reporter Sunny Malik about her role in her new release, movies and much more.
‘Housefull 2’ is your second film after Veer which released in 2010. How does it feel?
It is only my second movie and I am sharing screen space with some of the biggest actors that we have in our film industry. I could not have asked for a better second chance.
What is your role in the film?
I play a character called JLo, I am playing a supermodel in the movie. My love interest in the film is played by Ritesh Deshmukh. I could very much relate to my character because she is very bossy and that is how I am, in real life!
Were you offered the film because Salman Khan recommended you to the producers?
Saijd Nadiawala, the producer, is a family friend and he approached me for the movie. I was more than happy to be a part of it.
What is the premise of the film from your character’s point of view?
I can’t really reveal the story because there is one big confusion that we have created for the audiences, so I can’t say much about it. I am the beloved of one of the Jolly’s and everybody is going to laughing their guts out!


You are paired with Ritesh in the film. How was your experience working with him after working with Salman Khan in ‘Veer’?
It was superb because Ritesh is a fabulous actor and has brilliant comic timing, so he was a great help. After working with Salman, working with Ritesh was like working with two opposite people. It was a pleasure working with him.
Jacqueline told me that the most difficult part was keeping a straight face during funny scenes. Do you agree?
It was actually not difficult. My last film was a really serious movie and I wanted to do something more commercial and funny. I got the chance to do that and I am more than happy. There was nothing difficult.
As you are quite new in terms of the number of films you have done, did you feel that Sajid Khan was strict as a director?
I don’t know about strict but he is a genius because he worked with so many actors under one roof, which is not easy, and he has done it and that too with smoothness. So, hats off to him.

Just like Asin shot with Salman for London Dreams in the UK, you shot with him here for Veer. How was it like to shoot here again?
It was amazing. I love London and love coming here. We shot in Peterborough, a small town we had gone to and it was a new place for me. It was really beautiful, we used to go out every evening, and it was so much working there.

Were you recognised by fans while shooting here?
Yes, I was at times but I also had good security that took care of me.
You are often compared to Katrina Kaif because of your looks. Does that bother you anymore or is it just old news now?
It is comparatively very less now. People have now started to recognise me as Zarine Khan and no more as somebody’s look-a-like and I am really happy about it. But I need to work really hard and somewhere down the line I will be successful in doing that.
Your female co-stars said that all the girls bonded really well. That is really unusual.
Yes, I don’t know. I mean, there have been no cat fights and we have all been like one big happy family.  We have had no jealousy and insecurities. We were just there working and had our girl gang, we were having fun, chilling out and even when we were not shooting we were going out and making plans.
How was it like to share screen space with legendary actors like Rishi Kapoor, Randhir Kapoor and Mithun Chakraborty?
It’s always a delight to work with Mithun Chakraborty as I worked with him already in my debut film.  I have always been very fond of Rishi Kapoor. I was actually looking forward to meet the veteran actors instead of the younger actors. I was more than happy to meet Rishi Kapoor. Randhir Kapoor is a super chilled out person. You can have conversations with him about anything. You will not feel the generation gap at all. Boman Irani is another fabulous person, who is there to help you and guide you. I was the least experienced on this set, as it is only my second film. They were all out there to help me and guide me and I am really thankful to all of them.
Why should UK fans go and watch the film?
After a very long time, you will pay for just one ticket, but you will get to see so many actors in a film. The yesteryear actors in the film will be dancing for a competition in the film which is fun. I am sure people don’t want to miss that. Come to the theatres on the 5th April 2012 and show us some love. (Laughs)
Following the very successful Housefull, Eros international, Producer Sajid Nadiadwala and director Sajid Khan have teamed up once again to release their latest venture, Housefull 2 on the 5th April 2012 across the UK. Housefull 2 – The Dirty Dozen stars Randhir Kapoor, Mithun Chakraborty, Rishi Kapoor, Johnny Lever, Boman Irani, Akshay Kumar, Ritesh Deshmukh, John Abraham, Shreyas Talpade,  Asin Thottumkal, Jacqueline Fernandez, Zarine Khan and Shahzan Padamsee.