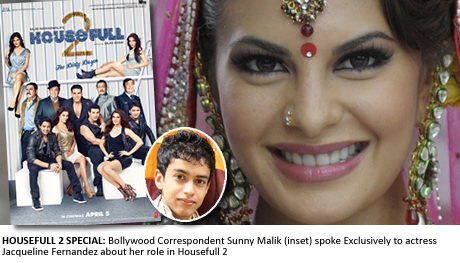 IT’S one of the most anticipated movies of the year, and ‘Housefull 2 – The Dirty Dozen’ with its all-star cast – does not disappoint. Bollywood superstar Akshay Kumar teams up with Sajid Khan yet again to deliver a quirky, entertaining and rib-tickling comedy.
Bollywood correspondent Sunny Malik caught up with actress Jacqueline Fernandez for an exclusive chat…
What is your character like in Housefull 2?

I play a girl called Bobby in the film and I am an animal right activist (like Asin) and work for LAW which is Loving Animals Worldwide. I also play the daughter of Randhir Kapoor, who is trying to get his daughter, played by me, married to someone who is really rich and successful.
Do you find the perfect rich guy then?

No, we basically get conned into marrying someone who we think is Jolly. What actually happens is that all four girls in the movie, all the brides-to-be think that they are marrying a guy called Jolly.
So, who is Jolly?

That’s where the confusion starts when we all end up at the real Jolly’s house. Everyone is basically trying to hide the truth and lie and it’s just really interesting.
Were you offered Housefull 2 because you had done the item number ‘Dhanno’ in Housefull?

Yes, I did do an item song for Housefull but from time Sajid Khan told me that we are considering you for Housefull 2. I did not even know that the film is being made. I did not think at that time that I would be able to be a part of such a big franchise in a leading role. I did not even know that it would even materialize but he was true to his word as I got the call from him last year and he told me that he wants me opposite John in Housefull 2. He told me that it’s a great role and that I am at par with an amazing actress like Asin. It just took off from there and I was really excited.
John stayed at a separate Hotel while shooting in the UK and did not hang-out with the rest of the cast as much as everyone else. Was it difficult to bond with him?

Oh No, John is a thorough professional. You know, we were all very close and bonded really well. We shared meals all the time. There were of course times when you had a long day. You really just want to be by yourself and John is a fitness freak. He would basically just go and work out. He is a thorough professional and I think he makes good use of his time. But you know, during lunch time we all would hang out together and he is a great person to talk to. I have been getting a lot of advice from him and he himself was an outsider coming into the industry and I also am one.

It was also interesting to see what kind of tips and advice he would give to me.

Was it hard to keep a straight face during a funny scene?