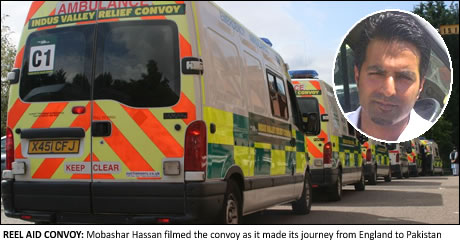 THE journey of ten ambulances on a relief convoy to Pakistan has been captured on film by a British Asian filmmaker.
Mobashar Hassan was part of 21 volunteers who drove a phenomenal 6,500 miles across ten countries to deliver vital aid to Pakistan flood victims in the Indus Valley.
The trip, which took place last August, was organized by Mercy Worldwide who approached Mobashar about filming the momentous trip.
Although admitting he was initially worried at the thought of the grueling trek, his thoughts quickly turned to those desperately in need of the supplies the mission sought to deliver.
Speaking to The Asian Today, he said: “When I was first approached by the convoy organisers about the mission, I was interested but worried as I knew that the route itself after Europe is dangerous and due to what you hear in the news about Iran and Pakistan it did make me think that the trip is not safe enough especially with our filming equipment.
“But it was the passion of Mercy Worldwide the organisation behind the mission and there convoy leader that made me really consider this. I felt that this was a good chance to give something back to people who sadly are less fortunate then ourselves.”
Mobashar, co-founder of Karakoori Productions, was joined on the trip by his colleagues Khurum Khan and Majid Kabiri.
Together the trio filmed the highs and lows of the mission which saw them drive across ten countries.
And for Mobashar the drive was both the best and most challenging part of the trek.
“As bad as the drive was it was also the best part too if that makes sense,” he said.
“Just that adrenalin rush of driving through one country and entering another and the landscape and scenery were amazing. Meeting people from other countries stopping over and sleeping in the ambulance or a service station, having a laugh with the other volunteers these things were priceless.”
And it was all worth it in the end when the convoy finally reached its destination some 6,500 miles later.
“The victims were overwhelmed and it was at this point we realised that we have achieved something special in our lives,” Mobashar added.
“I was emotional, it made me realise how ungrateful we are as people as they are others out there who are dying of hunger and do not have a roof on their heads, it was over whelming and made me realise these people still need help. The amazing part was how humble some of the victims were knowing they have nothing and having lost so much they still had a smile on their face and met us with open arms.”
Mobashar and his team at Karakoori Productions have now created a documentary about the journey entitled Road to Indus Valley.
The documentary has been filmed in both English and Urdu and Mobashar is in talks to have it aired on television.
“Through the documentary we want to raise awareness of how lucky we are and how help not just in the Indus Valley but across the world is needed,” he adds.
Promo versions of the documentary are available to watch on YouTube:
Road to Indus Valley English Promo: http://www.youtube.com/watch?v=J6LtAQwRzIc