Home Uncategorised The Indian Doctor back on BBC One 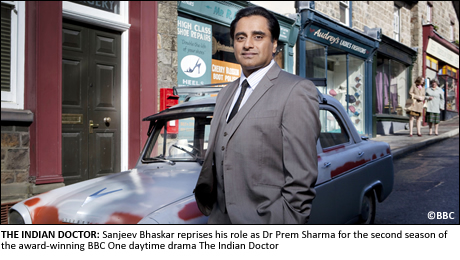 BBC One’s award-winning daytime drama, The Indian Doctor, will return to our screens for a second season later this month.
The show, which stars Sanjeev Bhaskar and Ayesha Dharker, attracted a legion of fans when it debuted on BBC One in 2010.
It tells the story of Dr Prem Sharma, played by Sanjeev Bhaskar, who arrives in Britain with wife Kamini, played by Ayesha Dharker, in 1963 where he is posted to a small Welsh mining village.
Kicking off the second season Dr Sharma must do all he can to protect the South Wales community where his successful practice is based following an outbreak of the deadly smallpox disease.
Airing over five consecutive days at 2.15pm from Monday 27 February, the second series of The Indian Doctor was inspired by events in 1962 when more than 900,000 people in South Wales were vaccinated after a smallpox outbreak.
During its first season the drama won a host of coveted awards including the RTS Awards for the Best Daytime and Early Peak Programme.
The Indian Doctor is made by Rondo Media and Avatar Productions and the Executive Producers are Tom Ware for Rondo Media, Deep Sehgal for Avatar Productions and Gerard Melling for the BBC.
The Indian Doctor, Monday 27 February, 2.15pm, BBC One