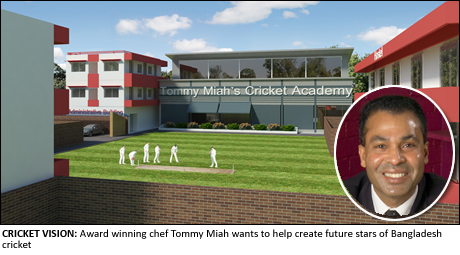 A BRIT-ASIAN Chef has joined forces with Spain’s luxury La Manga Club as he looks to raise money for a state-of-the-art cricket academy in Bangladesh.
Award-winning chef Tommy Miah is determined to cook up a cricketing masterpiece with plans to open the cricket academy in Sylhet, Bangladesh.
The award-winning chef, who spent his childhood in Birmingham, is eager to help nurture the next generation of cricketing superstars in the country.
And in a major fundraising boost he is being supported in his efforts by Spain’s luxury five-star La Manga Club resort.
All proceeds from Madrid Cricket Club’s 5th annual Charity T20 tournament at La Manga Club this April will go towards ‘Tommy Miah’s Cricket Academy’.
Every year, the charity tournament attracts cricketers from across Europe and this year will see the Milton Keynes Cricket Club will take part.
Like its fellow South Asian counterparts India and Pakistan, cricket is the number one sport in Bangladesh – and Tommy is eager to help the country become a cricketing force.
“I have noted this enthusiasm and the way that cricket has been expanding over the past few years,” Tommy told The Asian Today. “More personally, cricket is a game that is close to my heart and one of which has many memories tied in for me. That is the reason why I would like to give something back to the community and promote a positive image of Bangladesh.”
Tommy has already flown out to Bangladesh as he puts into motion plans for the cricket academy in Maulvi Bazar, Sylhet.
The Academy will help develop cricket by providing training and education for youngsters eager to make their mark in the sport.
“The Academy will help in bringing out the best talent as youngsters will get better opportunities to showcase their abilities,” Tommy says.
“There is an abundance of raw talent available especially in untouched rural localities. Schools are the ideal breeding ground for young talent because the sport is so popular.”
Tommy, who owns several restaurants including The Raj in Edinburgh, which has been running for more than 20 years, The Original Raj Hotel, also in Edinburgh and Tommy Miah’s Raj Hotel, in Islington, will also be on hand to cook a charity gala dinner for those attending the tournaments.
Another big name supporting the tournament is world cricket legend Farokh Engineer, whose professional career spanned from 1961 to 1975, including playing for India in numerous internationals.
Speaking about Tommy’s cricket vision for Bangladesh, he said: “I’m very impressed with the cricket academy, it’s absolutely brilliant.
“I do hope youngsters in Bangladesh realise how lucky they are in having someone like Tommy to help them, and who knows Bangladesh could soon have their own Rahul or Sachin or even better. Inshallah the name of Tommy Miah is on the lips of every Bangladeshi and the entire cricketing world.”
More details on the tournament can be found at http://blog.lamangaclub.com/tag/cricket/

22 Killed After Bomb Explodes at Ariana Grande Concert in Manchester

Tax credits and other help with childcare costs

Muslim Women urged to share their stories for new exhibition