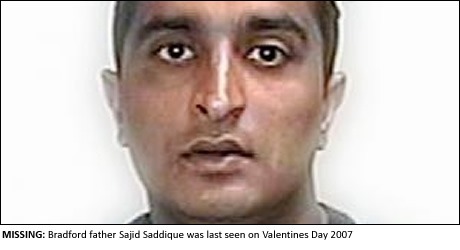 POLICE in Bradford are appealing for help to bring some comfort to a family still searching for a father on the fifth anniversary of his disappearance.
The Homicide and Major Enquiries Team are to re-interview key witnesses and review evidence five years on as part of a new drive to investigate the out of character disappearance of Sajid Saddique on Valentines Day 2007.

Detectives still believe the answer to Sajid’s disappearance lies within Bradford and are stressing that confidential and anonymous information can be provided through the Crimestoppers line.

Officers have carried out a wide range of enquiries since the disappearance of the Bradford business man on February 14 from Shipley and have pursued enquiries in several foreign countries.

Mr Saddique was last seen in the car park of the Asda supermarket on Manor Road, Shipley, at around 10.30am and was believed to be going to the bank and on to a business meeting.

His gold-coloured Volkswagen Bora was found in the Asda car park later that day and he has not been in contact with his family or friends since his disappearance.

Mr Saddique is described as an Asian man, five-foot eight inches tall and of medium build.

He was aged 32-years-old when he was reported missing.

Detective Inspector Steve Snow of the Homicide and Major Enquiries Team, said: “It is now five years since Sajid disappeared from Shipley and we remain determined to try and locate him to bring some comfort and resolution to his family.

“We have been constantly reviewing evidence regarding this case, and as we reach the fifth anniversary of Sajid’s disappearance, are speaking again with key witnesses for fresh leads and information.

“Clearly this anniversary is a key time for his relatives who still seek answers as do we.”

The DI said that while enquiries had taken place to see of Sajid had travelled abroad it would have been out of character for him not to have tried to contact his family.

He added: “We still believe the clues to finding Sajid lie within the communities of Bradford and appeal to residents to contact us with the vital pieces of information we need.

“If people are reluctant or scared to speak to the Police they can ring the Crimestoppers charity and pass on information anonymously on 0800 555 111.

“Confidential information will be respected and all new leads will be followed as part of our ongoing search to find Sajid.”