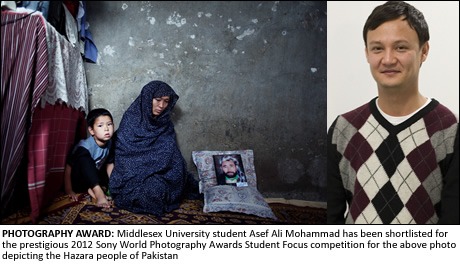 A MIDDLESEX University student has wowed international judges and has been shortlisted for a prestigious photography prize for his work depicting the Hazara people of Pakistan.
Asef Ali Mohammad, who moved to the UK 10 years ago from Pakistan,  is amongst an international cast of ten finalists from as far afield as South Africa, USA and Russia for the 2012 Sony World Photography Awards Student Focus competition.
Final year BA Photography student Asef submitted his image of Hazara people in Pakistan. The Hazaras, who live mostly in Afghanistan, Iran and Pakistan, have been subject to persecution, kidnapping and target killings – something Asef wanted to raise awareness of.
Student Focus is a high-profile international student photography award open to all universities across the globe which run a photography course. This year the competition has attracted entries from over 200 institutions across six continents. The finalists have been given a final brief, from which an overall winner will be selected.
Asef, from North Finchley, said: “I’m excited about being nominated for such a prestigious award – but this is just the start, I can’t wait for the rest of the process.
“The whole environment that has shaped up in recent years around photography at Middlesex is fantastic. Each year I’ve seen other students get published in magazines and exhibited at places like the National Portrait Gallery – it sets the bar high, inspires, and gives you something to aim for.”
Middlesex University BA Photography programme leader David Simmonds said: “Asef has been an outstanding student on the photography programme at Middlesex University. A talented image maker, he is a caring, insightful and determined young man. Together these qualities have enabled Asef to make mature, thought-provoking and sensitive images on often challenging subjects to which he has close personal connections.”
The ten finalists will take part in the final competition with the winner announced at the Sony World Photography Awards ceremony at London’s Park Lane Hilton Hotel on 26 April 2012. Students will also have their images will be exhibited as part of World Photo, at Somerset House, London.