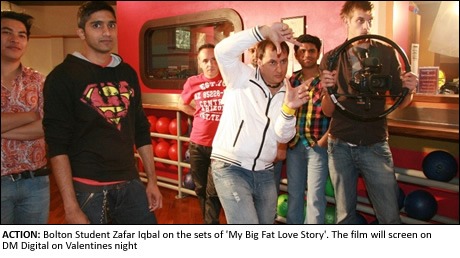 A BOLTON student has brought a super-sized Bollywood love story to Rochdale, just in time for Valentine’s Day.
University of Bolton PGDE student, Zafar Iqbal, has written and directed a feature-length, romantic comedy called, My Big Fat Love Story. And the film will have its television premiere on the most romantic night of the year.
The film tells the story of two British Muslim couples who deal with the everyday strains of a relationship in modern Britain.
Speaking about the film Zafar said: “My Big Fat Love Story is a simple, poetic movie based on the conflict of a modern and traditional couple, with a touch of Bollywood. It will make you laugh, cry, dance and celebrate love as never before.”
The film is set in Zafar’s hometown of Rochdale and a majority of it was shot in the area where he grew up. Other scenes were filmed in locations across Greater Manchester and Lancashire and Zafar says he and his team got a positive response wherever they went.
He said: “We shot in Rochdale, Heywood, Burnley, Littleborough, Calderdale, Manchester, Haslingdon and Pendle. The team enjoyed giving autographs to the public who loved watching the filming of song and dance sequences.”
Such was their popularity, filming often had to stop due to gathering people.
He added: ‘The movie had regular, but positive, interruptions at most of the shooting locations, due to crowd build-ups. The whole team loved planning and delivering the movie and are very grateful to everybody for their wonderful support.’
My Big Fat Love Story was made for just £10,000 and Zafar says he has learned a lot from putting it all together.
“For me, making this film has been a learning experience from every angle you can imagine, dealing with all the good, bad and ugly,” he said.
“I’m proud of myself and the team for completing a fine film that will hopefully become a historical work.’
My Big Fat Love Story will be screened on DM Digital, Sky Channel 802, at 6pm on Valentine’s Day.