Bollywood reporter Sunny Malik gets up close and personal with duo 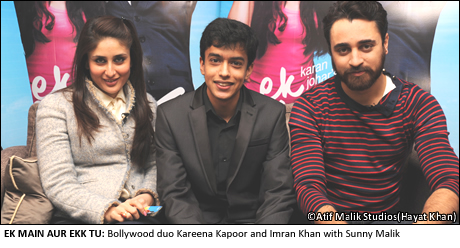 BOLLYWOOD chocolate boy Imran Khan and the ravishing Kareena Kapoor flew into London earlier this month to promote their upcoming rom-com ‘Ek Main aur Ekk Tu’, directed by Shakun Batra.
The film set in the United States, revolves around the story of Rahul and Riana. Their story takes place in a time frame of a week and shows how both characters change in a short span of time.
Imran and Kareena, who will be seen together in a film for the first time, get married after having too many drinks on Christmas Eve in Las Vegas.
The stars of this anticipated Karan Johar Valentine week release, in a joint interview, candidly spoke to Bollywood reporter Sunny Malik about the film, their characters, their love for the British capital and their expectations of the film at the UK box office.
Welcome to London.
Imran: Thank you very much.
Kareena: Thank you.


You guys come to London pretty often for promotions and for vacations. What do you like about the city?
Imran: You know, it reminds me of Mumbai actually (laughs).
Kareena:  I wish we had more time then I would have definitely shown him around.
Imran: It has that feeling that it never turns off. Mumbai, New York and London it’s all like that. You always feel that it’ always buzzing.

I could not deal with a place where everything is closed by 7 o’clock and they say ‘Sorry sir, that’s it’, or ‘Oh, today is Thursday. Today you cannot shop’ (laughs).
Kareena: But I love London, it’s like a second home.
You both have been travelling around the world without much break. Is it always hectic like this?
Imran: Yes, pretty much. But this is the first time that everyone will be able to see it. I am not sure if you know, but I have been filming my travelogue of all my promotions.


Tell me about your characters in the film?
Imran: I play a guy called Rahul. He has lived his entire life based on what his parents want. He is following a pre-determined path. They decided which school he should go to, which college he should go to, everything has been laid out for him. He is actually not living his own life. One day he meets this girl Riana, who shows him what he has been missing out on and opens his eyes. She shows him what he could be.
Kareena: Riana is a fun, mad and crazy girl, pretty much the way I am, but I am not as mad and crazy (laughs).

She is very positive, optimistic and like a sunshine kind of girl.


Imran told me in 2010 just before you started shooting that he pushed the director to have you in the film. So were there any fan moments when Imran Khan the actor was the fan?

Imran: No, No, No.
Kareena: Imran why were there no fan moments? (Laughs)
Imran: I was taking photos of you.


You guys get drunk and get married in the film. I know that Imran loves the beer in London. So any plans to get drunk before heading back to Mumbai?
Imran: We don’t have such luck man.
Kareena: Oh God, we don’t have any time.
Imran: It’s crazy we just got here this morning, we will be stuck in this room all day and will be flying out next morning.


Is Riana’s character inspired by Ayesha, who is Imran’s friend and hairstylist as she has co-written the film with Shakun Batra, the director?
Imran: I think there is a fair amount of Ayesha in Kareena’s role.
Kareena: Yes, I think so.
Imran: I think there is also a fair amount of Shakun in Rahul. It happens you know, first time filmmakers put a lot of themselves into their characters.

Agneepath, also a Dharma Productions film just broke records at the box office. What do you expect from Ek Main aur Ekk Tu at the UK box office?

Kareena: See, it’s a different kind of film. We don’t expect it to break box office records but we are definitely expecting it to be a successful and appreciated film. I hope everyone says that the performances were great.
Imran: ‘Ek Main aur Ekk Tu’ is the kind of film everyone will speak well of, number wise I never know how to predict these things and to tell you the truth I don’t see it as an ‘Agneepath’ record breaking film.


‘Ek Main aur Ekk Tu’ a UTV Motion Pictures release will be out in UK cinemas on 10th February 2012.