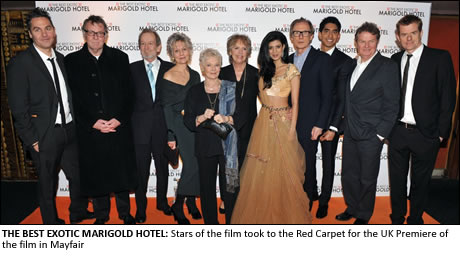 SLUMDOG Millionaire star Dev Patel was back on the red carpet for the UK premiere of his latest film The Best Exotic Marigold Hotel.
The film stars a host of acting royalty including Dames Judi Dench and Maggie Smith and Bill Nighy, as well as newcomer Tena Desae.
Stars of the film walked the red carpet for the film’s premiere at the Curzon Cinema in Mayfair, Central London.
The film tells the story of a group of British pensioners who abandon their homeland enticed by advertisements of ‘The Best Exotic Marigold Hotel’, a seemingly luxurious sanctuary for “the elderly and beautiful” in Jaipur, India.  On arrival, they discover that the hotel falls somewhat short of the romantic idyll but are gradually won over by the ever-optimistic young entrepreneurial manager Sonny played by Patel.
Speaking about the film he said it was amazing to share screen space with the likes of Judi Dench and Maggie Smith.
“I just had to be a sponge on set,” he was quoted as saying.
“It really has been one of the most amazing experiences in my life, to have them all in this package deal has been amazing.”
The Best Exotic Marigold Hotel releases nationwide on 24 February 2012