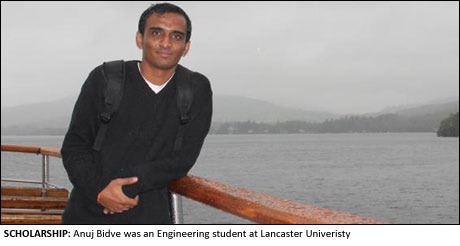 THE University where Indian student Anuj Bidve was studying when he was murdered on Boxing Day is to set up a Scholarship in his memory.
Mr Bidve was studying engineering at Lancaster University when he was killed in Salford on 26 December.
The Anuj Bidve Memorial Scholarship will fund a student graduating from the University of Pune in India to come to Lancaster University to study an MSc in the Engineering Department.
Mr Bidve graduated from the University of Pune before continuing his studies at Lancaster.
It is hoped that the first student to receive the award could come to Lancaster in October 2012.

Lancaster’s Vice-Chancellor Professor Mark E. Smith said that the scholarship, which is for fees and accommodation, has been agreed in line with the wishes of Anuj’s family.

He said: “The scholarship is a fitting and lasting way of remembering Anuj, who was an outstanding student.”
Mr Bidve was shot in the head as he walked with friends along Ordsall Lane in Salford.
Kiaran Stapleton, 20, of Ordsall, has been charged with his murder.
He is due to appear at Manchester Crown Court in March.