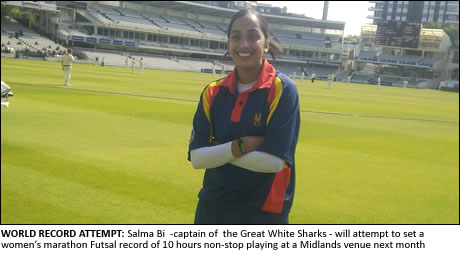 FOOTBALLING females are preparing themselves for a test of endurance which could land them in the record books.
In March, 40 ladies will attempt to set a women’s marathon Futsal record of 10 hours non-stop playing at a Midlands venue.
The event will take place at the Birmingham International Futsal Arena on Saturday, March 10, between 9am and 7pm.
It has been organised by award-winning sportswoman Salma Bi, who is hosting the showpiece to celebrate Women’s International Day, which happens on March 8.
Salma, 25, is better known for her cricketing achievements, but is also a very keen Futsal player and captains the Great White Sharks, the first female Asian-Muslim team to compete in the Birmingham Women’s Futsal League.
The Futsal marathon will be a fundraiser for two causes – the first ever women’s T10 indoor cricket tournament at Edgbaston on April 28 and also the National Autistic Society – a charity close to Salma who has a young niece who is a wheelchair user.
“We want the event to raise awareness of women’s Futsal as well as raise money for two worthy causes,” said Salma.
As there is no official world women’s marathon Futsal record, the Birmingham event hopes to lay down a marker for others to try to beat.
Salma added: “The attempt to set a Futsal record has already got a lot of heads turning.
“There are plenty of female individuals who believe they can set themselves a challenge and beat it.
“No other women’s Futsal arena/team has attempted such a record. This definitely will be one to watch.
“The game will be open to spectators to come and support the girls throughout the day. We hope to raise awareness of female sports around the world and what a way to do it.”
Salma, who is executive director of cricket coaching organisation Believe in M.A.D (Making A Difference), is not settling for nothing.
She hopes to Make the Difference by doing and getting women involved in events nobody has yet attempted.
So far she has had a great response. This year her efforts will focus on the Futsal 10 hours women’s record and then the T10 Women’s World Cup Indoor tournament – an initiative featured last month in The Asian Today.
Cricket is Salma’s biggest love and along with co-founder Khalid Siddique is behind a new coaching organization called Believe in MAD (Making A Difference) which aims to raise awareness of both girls/women’s cricket and disability cricket.
Part of the initiative will involve hosting a pioneering national Ten10 cricket tournament that invites girls aged 14 and over to participate in a six-a-side World Cup-style competition.

Gay online dating in Victoria. In a dating globe that mainly provides cisgender, heterosexual people, queer people of all denominations are often compelled to...

I THEN STUMBLED ACROSS A WONDERFUL – I MEAN BEAUTIFUL – person

7 ideas to see pay day loans in Abilene. What exactly do I Need...

50 (entirely maybe not discreet) approaches to become some one Down