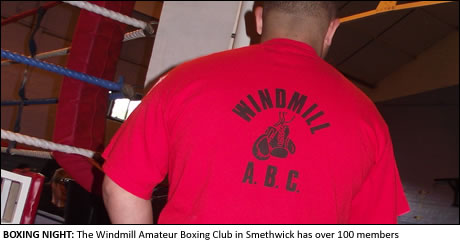 A SMETHWICK boxing club is hoping for a night of knockout success when it hosts its annual event.
The popular annual ‘Home Show 2012’ will return to the Windmill Amateur Boxing Club this month with orgainsers promising a bonanza boxing bill.
The club, based at the Windmill Super Youth Centre, boasts a phenomenal 118 members who use the club.
And while some of those members will be in action on the night, a host of amateur boxers from across the country will also take part in a bill which sees up to 15 bouts take place during the event on Friday 10th February.
Mohammed Abdullah, Development Coach and Club Welfare Officer, said the event will lead on from a successful night held last year.
“Our boxing club has been hosting a boxing show for the past 20 years since the club was established but due to financial implications and lack of staffing we were unable to host our club show between 2006-2011,” he said.
“We are now back to normal where we hosted a successful show in 2011 so bring on 2012!”
The show will include refreshments, food, art, music and VIP guests including local Birmingham champion Nasser Al Harbi, who Mohammed says is an inspirational figure to younger boxers at the club.
“He comes and offers inspirational motivation and tips to our young talented boxers,” he said. “They all look up to Nasser and aim to be a champion just like him!”
And there will be another reason why the event will hold a special place in the history of the club.
Birmingham riot victim Haroon Jahan was a member of the club for over a decade and his older brother and fellow boxer Tahir has accepted a special invitation to the event.
“Haroon was a member of our club from the year 2000 – 2011 – during his membership he had a very impressive record, he always worked hard in training and also helped mentor and coach some of the younger members in the club,” Mohammed said.
“He was a hard working individual, driven to do well and improve all the time.
“Our club was extremely saddened by the death of Haroon – we actually have the younger cousin of Haroon currently at the club – who now wears a tribute t-shirt to Haroon, Shezad and Abdul Musavir to every entrance to his bouts/fights.
“As a club coach and former boxer at the Windmill Amateur Boxing Club, I had the pleasure to train alongside and coach Haroon and his older brother Tahir Jahan during their amateur boxing careers – they were both talented and able in the sport of amateur boxing.”
The event has already attracted support from a number of local organizations including West Midlands Police, Sport 4 Life and Latifs.
Tickets to the event are priced at £10.00 and are available by phoning 07938123770.

THE MUSICAL, EVOLUTION OF BHANGRA, WITH A LIVE CONCERT EXPERIENCE LIKE YOU HAVE NEVER...