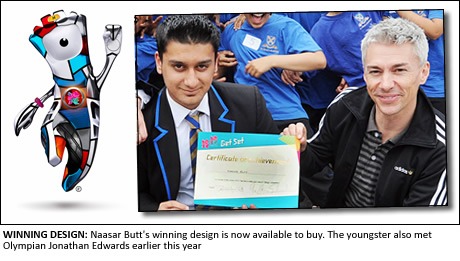 A BIRMINGHAM student has become part of Olympic legacy – after his London 2012 Pin Badge design hit the shelves!
Naasar Butt, from St Albans Academy in Highgate, Birmingham, took part in the London 2012 design competition ‘Get Set to make your mascot’ earlier this year.
And his beat off stiff competition to be crowned winner of the West Midlands region.
Naasar’s innovative design has now hit the shelves and is available to buy – making him an official part of Olympic history.
‘Get Set to make your mascot’ was an initiative run through the London 2012 Education Programme ‘Get Set’ and invited children and young people in schools and colleges to design a version of the Olympic mascot Wenlock or the Paralympic mascot Mandeville that they thought represented the place in which they live or go to school – their community or region.
There were more than 2,500 entries into the competition and Naasar’s design was shortlisted from the West Midlands. Naasar was then invited to attend the national final in London. At the final the budding designer had to showcase his presentation skills as he pitched his design to a judging panel which included Jonathan Edwards, Paralympic wheelchair basketball player Ade Adepitan and London 2012 Head of Education, Nick Fuller.
After Naasar was announced as the winner from Birmingham he was given the opportunity to travel to London where he spent the day with a top London design agency, developing his design into a 3D animated mascot graphic.
In July Naasar was also surprised by Jonathan Edwards at St Albans Academy with a special presentation where Naasar was given a certificate and mounted copy of his design.
Speaking about his design Naasar said: “In my design Wenlock is decorated in bright colours to represent that Birmingham is a colourful and attractive city to come and visit for any occasion. But if we look closely, he also has bolts and plates on him, this is because Birmingham was the first engineering city in the U.K, so he has plates to represent that and also has some technology inside him such as night vision, thermal imaging, big lights and a brain to move like us and develop moves for himself, when he wants to move, the plates are heated so that they can curve.”
LOCOG Chair, Seb Coe said: ‘I’m delighted that Naasar’s designs, which reflect what his area means to them has been made into official London 2012 pin badges. This competition not only encouraged school children to think about what their community or region means to them but it also showed how young people across the UK can get involved and play their part in London 2012. I hope the competition has inspired and helped develop the designers of the future.’
Naasar’s Pin badge can be bought in London 2012 shops and John Lewis stores.