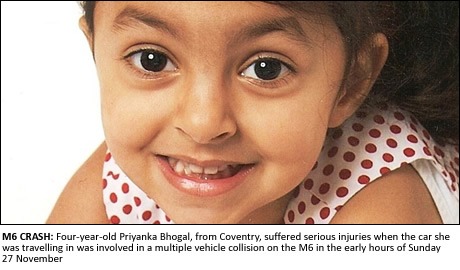 THE FAMILY of a four-year-old girl who died following a serious road traffic collision on the M6 motorway in Birmingham last month have today paid tribute to her.
Priyanka Bhogal, from Coventry, suffered serious injuries when the car she was travelling in was involved in a multiple vehicle collision on the M6 in the early hours of Sunday 27 November.
The child was rushed to hospital where, despite the best efforts of medical staff, she died a short time later.
Today Priyanka’s family have released a photograph of her, describing her as a “brilliant, caring and lively young girl.”
“Words cannot express how difficult it is for our family to come terms with, and accept the tragic death of our beautiful daughter Priyanka,” a statement from the family said.
“We loved her more than anyone could possibly imagine. In her short time with us she brought nothing but happiness and joy to our lives and everyone who knew her. She was a brilliant, caring and lively young girl who would have grown up to contribute so much to society. We will probably never recover from having her life so horrifically stolen from us.
“We are currently assisting the police with their ongoing investigation. In the meantime we would like to thank all our family, friends and neighbours for their kindness and support during this difficult time and ask everyone to respect our wishes to mourn her death in peace. This Christmas please join Priyanka’s brother and sister and all of us in saying a prayer for her.”
Police investigating the collision continue to appeal for witnesses to the incident to come forward.
Five vehicles collided on the M6 southbound between junctions 4a and 4 at around 00.25am on 27 November.
Eight people, including Priyanka, suffered injuries in the collision, however the injuries sustained by the other seven were not deemed life threatening or life changing.
The motorway was closed for more than six hours whilst officers from the Central Motorway Police Group, Highways Authority, and West Midlands Fire and Ambulance services dealt with the incident.
One man, aged 63 and from the Sunderland area, was arrested on suspicion of causing death by dangerous driving. He has been released on police bail pending further enquiries.
Police are urging any witnesses to this collision to contact the Central Motorway Police Group on 0121 626 1285.