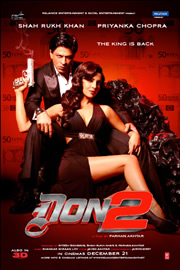 Director: Farhan Akhtar
Cast: Shah Rukh Khan, Priyanka Chopra
Five years ago Don was a wanted man hunted by law enforcement agencies from 11 countries. He had killed Singhania and taken over his drug cartel. After an organised cat-and-mouse game he walked away victorious becoming the king of the Asian underworld.
Having conquered the Indian sector, Don sets his sights on Europe. But he must face the wrath of the European underworld and Interpol to achieve his aim.
So the action shifts from Kuala Lumpur to Berlin as Don avoids assassination or arrest for his plan to succeed.
During his initial journey five years back he came across Roma who in her quest to avenge the cold-blooded murder of her brother is determined to seek vengeance.
Working closely with Mallik an Interpol officer Roma has now joined him in his search for Don.
Although deceased, Singhania still has a part to play in Don’s destiny. He has left behind a safety deposit box in Switzerland. The contents of which hold the key to Don’s new master plan. . . .
Director Farhan Akhtar sets a new benchmark in Indian filmmaking combining state-of-the art technology, high tech action sequences and a gripping narrative.
Akhtar and King Khan studied the lifestyles of various international gangsters to get under the skin of the character before film shooting began.
The movie was partly shot in Berlin where Khan managed to pull off a stunt jumping off a 300 feet building. He was also asked to bulk up and develop a six pack for his character.
Whilst Hrithik Roshan makes a cameo appearance in the film featuring the most talked about fight sequence with Khan, the thriller also stars the likes of Arjun Rampal, Boman Irani, Lara Dutta and Priyanka Chopra.
Don 2 combines two of the newest trends in Indian cinema. These are the 3D visual effects to bring audiences closer to the action and the rise in Bollywood sequels.
This means audiences can look forward to cutting edge stunt sequences in 3D and 2D experiences this Christmas season!