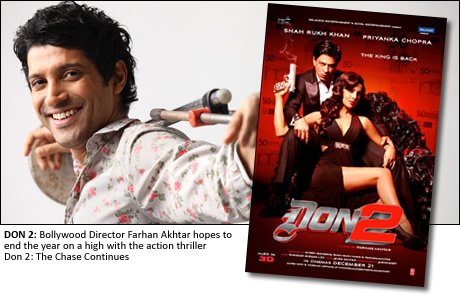 BOLLYWOOD is looking to end the year with a bang with the Christmas blockbuster release of Don 2: The Chase Continues – and here director Farhan Akhtar reveals why he was so determined to bring the infamous Don back to the big screen…
Tell us something about Don 2
I really don’t know what to say about the film as that way I will be giving out the whole story! It has been fun, challenging yet a satisfying journey so far to make this movie. I was guilty of saying that I won’t probably make a sequel of Don, but my obsession with the character got the better of me. With amazing help and support and almost a sharing of vision with Ritesh (Sidhwani, producer) and Shah Rukh and rest of the team, I could not help but make Don 2.
Who is the ‘King’ of Don 2: The King is Back?
The King of Don 2 is undoubtedly Shah Rukh Khan.
Did you consult your father and writer Javed Akhtar on the script of Don 2?
Whatever film I write, I give it to him to read. I want him to give his feedback on screenplay, dialogues. He is somebody who is extremely experienced, somebody who is very good with the art and craft of writing; and fortunately I have this kind of access to him. It makes sense for me to use him and I use him to get feedback on not only this, but every script.
When you were making the 2006 film Don: The Chase Begins Again, you consulted Salim Khan (Salim-Javed being the screenplay writer of Amitabh Bachchan’s Don in 1978). Did you do the same this time too?
I had gone to him to request him to give permission to make the film. I thought it was important that people who worked on the earlier film be happy with the remake we had made. So I met him regarding that, not the screenplay or such things. He was very, very kind and completely wished us all the best for the remake. Hopefully that applies to the sequel as well.
In the 2006 film, you retained some of the dialogues from the 1978 film like Don Ko Pakadna Mushkil Hi Nahi Namumkin Hai. Are you trying some new lines in the sequel or want to carry forward the legacy?
There are other dialogues in the film of course. For us, the line you just spoke about, strike a chord. But who knows, maybe some other dialogue Don says in Don 2, might match out to the audience. While writing dialogues and thinking about the style of the dialogues, I knew that the approach has to be to write it in a way that films of that time (1970s) were written, where people spoke with a bit of theatrical sense. There was a lot more drama in the lines. So I maintained the approach as it gives you good feeling and also makes the film sound different. It takes you back to the times when you got to see films like this where you know every dialogue was a DIALOGUE.  So it is written with that in mind. But again, whatever people take from that, is up to them. There are fun lines in the film, hopefully they will enjoy.
Did you ever think of another actor for Don, had Shah Rukh said ‘no’ to you?
I don’t even want to think about that. When I started out to make the film, I wanted Shah Rukh to play the character and he loved the part. Beyond that, I stopped thinking about any other actor as I got the person I wanted for my film.
Social networking sites are flooding comments since the Don 2 trailer was put on YouTube. What is the best compliment you have got so far?
The best compliment I have got about the film so far is ‘Thank You for making Don 2’…that’s the sweetest thing one can say with minimum words.
Why did Don 2 take so long in the making (five years)?
Well, it was a challenging but extremely satisfying journey. I was guilty of declaring that I won’t make a sequel for Don 2, but once I spoke to Ritesh Sidhwani and Shah Rukh Khan, I could conceive it.
Why have you decided to make the film in 3D?
The film is not shot with the 3D camera. But when we saw that there is a possibility to make it in 3D, we gave it a shot. The people at Reliance made a demo and it looked very good. Technology has advanced a great deal; it is great to watch the film in 3D as well.
So who is Farhan the actor’s favourite actor?

I like many actors. All actors have their own strengths. But I do enjoy watching Hrithik Roshan, Aamir Khan and Ajay Devgn purely for the fact that when you see their body of work and the body of work of most other actors, you notice that these guys bring something new to the table by way of a story or character. I love the way Ajay keeps reinventing himself as an actor. I would hate to watch the same kind of performance over and over again. An actor must keep challenging himself if he wishes to have a really long innings. Even as a filmmaker, I believe in mixing genres. A film must be entertaining. When I say entertaining, I don’t mean that you should only make people laugh. You can enthral them with drama or comedy. There should be a sense of variety in storytelling and performance.
‘DON 2’ will release nationwide on Wednesday 21st December 2011 in 2D and 3D by Reliance Entertainment