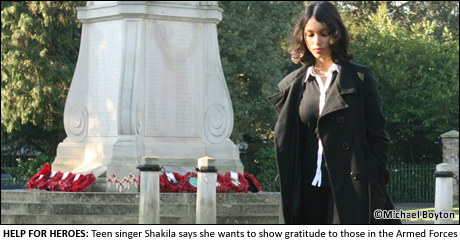 A BRITISH Asian teenage singer is to release a charity single to raise money for the Help for Heroes charity.
East London teen Shakila says she wants to show gratitude to all the people in the armed forces who have served and continue to serve in Afghanistan and Iraq.
The single, titled ‘Heroes’, is set to be released on 28 November and will be the 14-year-old’s third single.
Shakila goes to school in Newport, Essex, which is very close to Carver Barracks and has quite a few friends who have a parent serving in Afghanistan. She is well aware of the dangers being faced there, as well as the sacrifices being made by some of the bravest people in the world.
Shakila says about her new song: “I am so proud of my new song ‘Heroes’, because it’s dedicated to all those wonderful people in the armed forces who are true heroes. I appreciate the terrible things they have to do and I also know some of these people are coming back with horrific injuries.
“I want to help raise as much money as possible for these amazing people who really need a lot of care and support. Help for Heroes does an outstanding job and I want to do whatever I can to help.”
Bryn Parry, CEO and Co-founder of Help for Heroes says: “Help for Heroes is all about ‘doing your bit’ and Shakila’s song is a wonderful example of someone having a good idea, rallying support and having a great deal of fun while they raise money for a wonderful cause.
“We have been able to use the £millions raised, over £117m in just four years, to provide practical and direct support to those wounded in the current conflicts. The money you raise is needed, it is being used and it is hugely appreciated; sadly, we need a great deal more. You are part of something that is very British and wonderful and I would like to say thank you for this and every other fund raising event that it inspires.”
Shakila is delighted with her latest song and, this time, she was able to add even more of her musical talents. She played the piano on the recording and came up with all the vocal ideas, including the chorus and harmonies for the song.
She added: “I’ve worked very hard with some very talented and generous people to release Heroes and I really hope people buy this song as I know it can benefit a lot of people.”