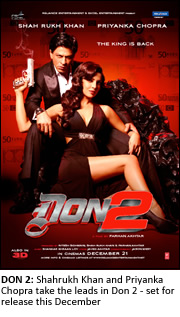 BOLLYWOOD stars Shahrukh Khan and Priyanka Chopra are looking to end the year with a bang with the release of the highly-anticipated Don 2.
Both reprise their roles with Om Puri, Lara Dutta and Kunal Kapoor making up a supporting cast.
The film comes five years after they both hit the screen in Don: The Chase Begins.
The 2006 film was a remake of the famous 1978 Amitabh Bachchan film of the same name.
Don 2 will hit our screens on 21 December in both 2D and 3D formats.
The film has been directed by Farhan Akhtar.
A spokesperson for the film said: “Farhan Akhtar sets a whole new benchmark in Indian filmmaking, combining, state-of-the art technology, high tech action sequences and the most gripping and stylish narrative to steal out of Indian cinema in recent years.”
‘DON 2’ will release nationwide on Wednesday 21st December 2011 in 2D and 3D by Reliance Entertainment.