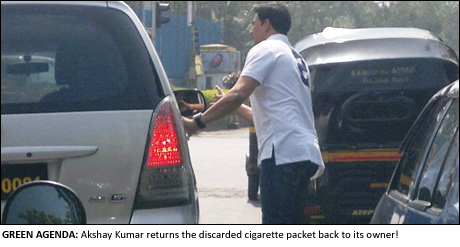 HE may be one of India’s biggest celebrities, but that didn’t stop Akshay Kumar from chastising a smoking litter lout in the middle of a busy Mumbai street!
The Bollywood star is a staunch supporter of the green agenda, driven to protect and respect the environment. But this time he has gone one step ahead by setting an example for all the litterbugs who don’t respect or care for their country and their surroundings.
Kumar disciplined a man smoking in his car during Mumbai traffic, for carelessly throwing an empty cigarette packet out of his car window.
In the middle of a busy road, Akshay walked out of his car, picked up the cigarette packet and returned it to the driver.
Talking about this incident on Twitter, Akshay said: “On my way to work this morning this guy really frustrated me. I had to get out of my car in the middle of Bombay traffic right by Mr Bachchan’s house and literally pick up off the road an empty packet of cigarettes that this man decided to carelessly throw out his window without a second thought.
“Not only do we have to put up with the fact he smokes but we also have to deal with the fact that he doesn’t care a damn about his city or his motherland that God has so graciously provided for him.”